This was done just for fun, to see if Sugru , a creative putty to fix or adorn a lot of little things, would be super strong. Turns out it isn't but it helps to get splattery footage and wet lenses. I also tested a new LED light behind the group and the Olloclip clip-on lens for the phone. Now I can't wait to use the new TPF basket and see if I can catch footage of the puck swelling and puffing after an extraction. Tije remarks that the Sugu behaves remarkably well, as it ripped in the Sugru itself but did not  get ripped from the surface, so it sticks very well to the materials. Tije would like to use the Sugu for a sealant next time. I hope he will use red and yellow so you can 'see' the seals better!
Een reactie posten
Meer lezen

Tije turning a LONDINIUM portafilter into a 'naked' 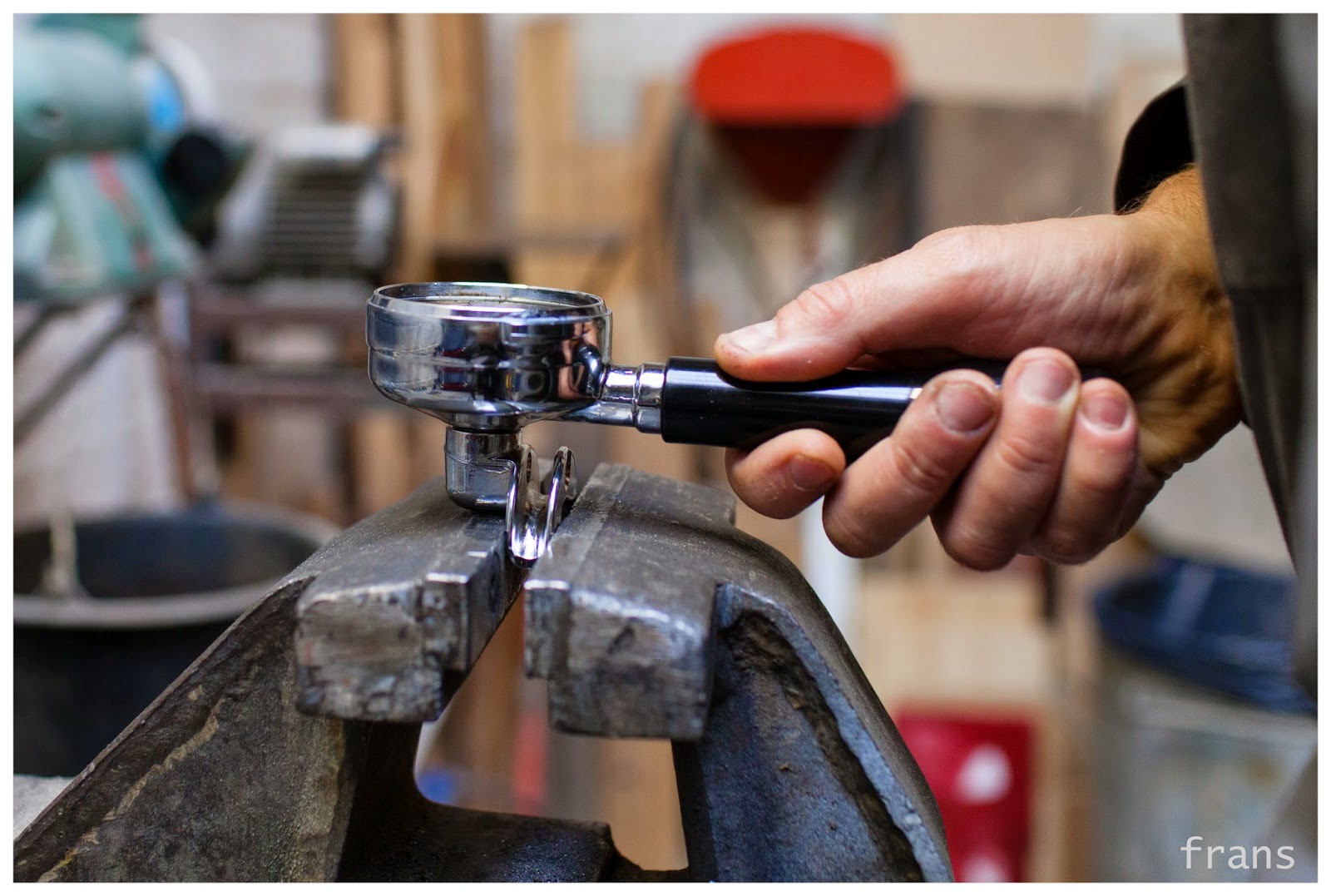 Since the standard 'naked' portafilter from LONDINIUM is excellent but a little too tight at the lower end to facilitaie the new Transparent Portafilterbasket  that Tije produced, Tije took one of my regular L1 portafilter and changed it into a naked one that exactly fits the transparent one. Unscrewing the double spout Double spout off. Future TPF on the right Heating the metal to soften up the plastic handle Loctite Softened up, the thread does not stick anymore and unscrews PF in the lathe Circular saw ready to start eating away Grinding away, advancing slowly And gone is the bottom! Sharp edges still Filing away the sharp edge And ready! Perfect fit for the transparent basket Fitted on the LONDINIUM 1 ready for action
Een reactie posten
Meer lezen

Thank you Graciano (and Lore)! 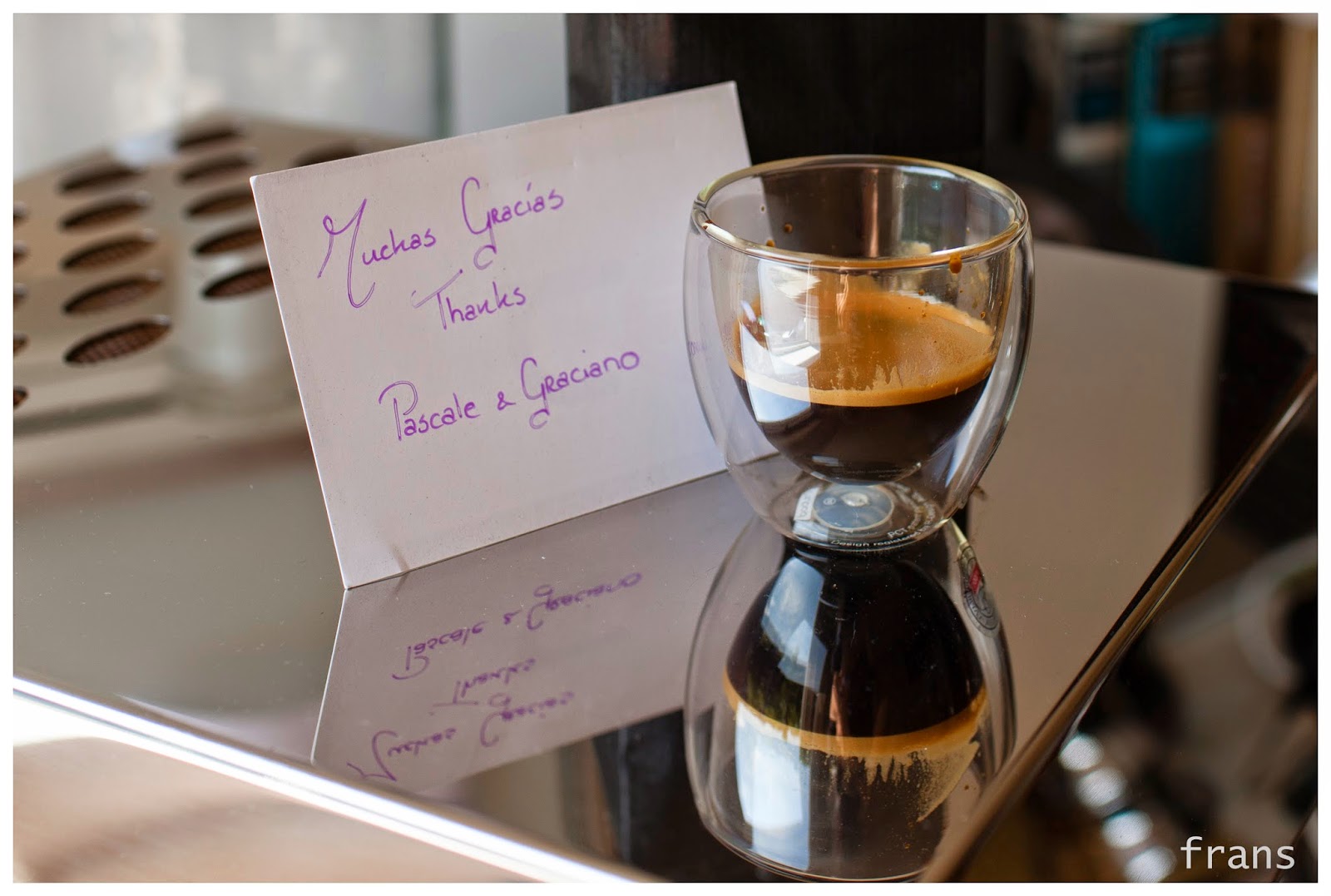 My eldest daughter Lore is a midwife based in Arnhem and a while ago she helped with the birth of the third son of a wonderful couple from Panama. She told me they were active in the coffee business and I found that very interesting. Turns out it was Mr Graciano Cruz! I never met him, missed a few opportunities when he was in Amsterdam but I have mentioned his coffee a few times already. His Los Lajones beans deliver the most exquisite coffee I have tasted so far. If you have ever been overwhelmed by the beauty of unwashed Sidamo beans, you came very close to the experience Los Lajones can give you. I'm very happy I got a hold of these beans through Kees Kraakman and Adam Craig. When he heard that Lore's father is into coffee as well, Mr. Cruz gave her a few bags of green beans (Panama Emporium, Los Lajones natural and Los Lajones Peaberry Natural) plus one that was already roasted very light. In the 20g IMS basket, I dosed 24g of the roasted beans, ground very fine (
Een reactie posten
Meer lezen 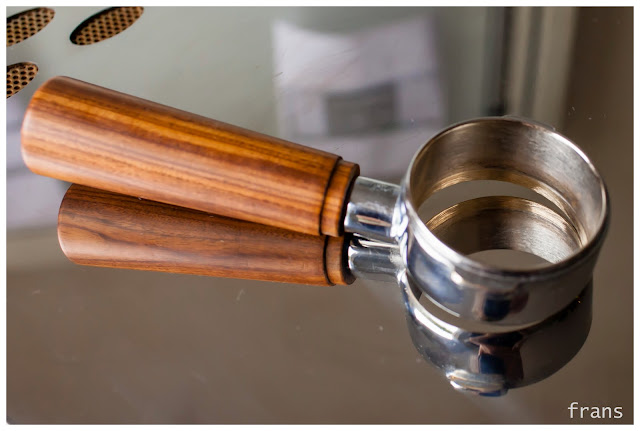 Thanks Tije! Also for taking off the slightest bit of the "high nailpolish gloss" off the wood which now looks more like wood and not like plastic anymore ;-)
Een reactie posten
Meer lezen

Today, Tije nearly finished the new Transparent Portafilter. When the sealant has hardened and some final polishing is done, it's ready for action. Steps taken The polished 'puck' is first covered with a transparent protective tape. Then the existing hole is drilled out to be much bigger, followed by the lathe cutting out a tiny sliver at a time from the inside out, widening the inside hole and slowly turning the 'puck' into a short 'bottomless basket' with an outside rim on the top and an inside rim on the bottom where the metal mesh bottom will be fitted. Small disaster Despite the utmost care and the tiniest steps taken with the two delicately sharp cutting tools made by Tije for the task of cutting out most of the bottom of the 'basket', at one point the lathe lost its grip on the basket which damaged the top rim a little, also leaving a deep scratch on the outside of the basket. Finishing this prototype Tije wanted to start
Een reactie posten
Meer lezen 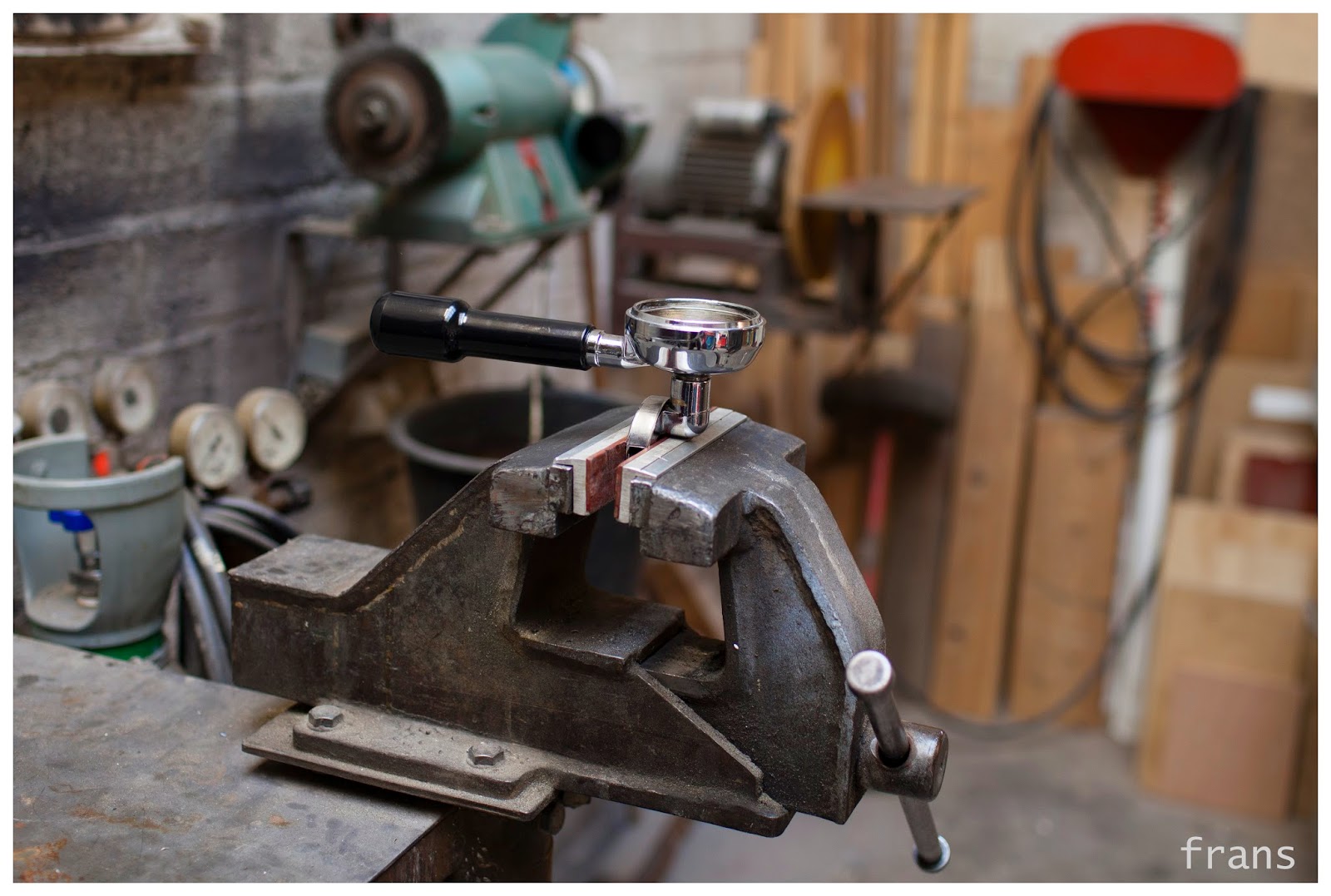 Several people and companies have asked Stephen Sweeney if he could make them one or more specimen of his Transparent Portafilter but he told them it's way too much work.  Tije, in Amsterdam, made one for the La Pavoni and after he finished his version, he understood why Stephen has so far declined most requests. Still, Tije was willing to make me another one that would fit in most current commercial group portafilters, like my Rocket E61 and the LONDINIUM lever machine. Tije agreed to let me see "the making of" the TPF and allowed me to take many pictures and a few video clips. I post them here so others who would like to build their own can watch and learn. It is a great pleasure to see Tije at work. Calm, anticipating all the next steps to take, he prepares his tools, sometimes cutting and filing tools to make them best for the task he has in mind. He knows his materials and while working, explains how steel behaves, how much easier brass is to work with and how
Een reactie posten
Meer lezen
Meer posts