Getting a Bestmax Premium water filter 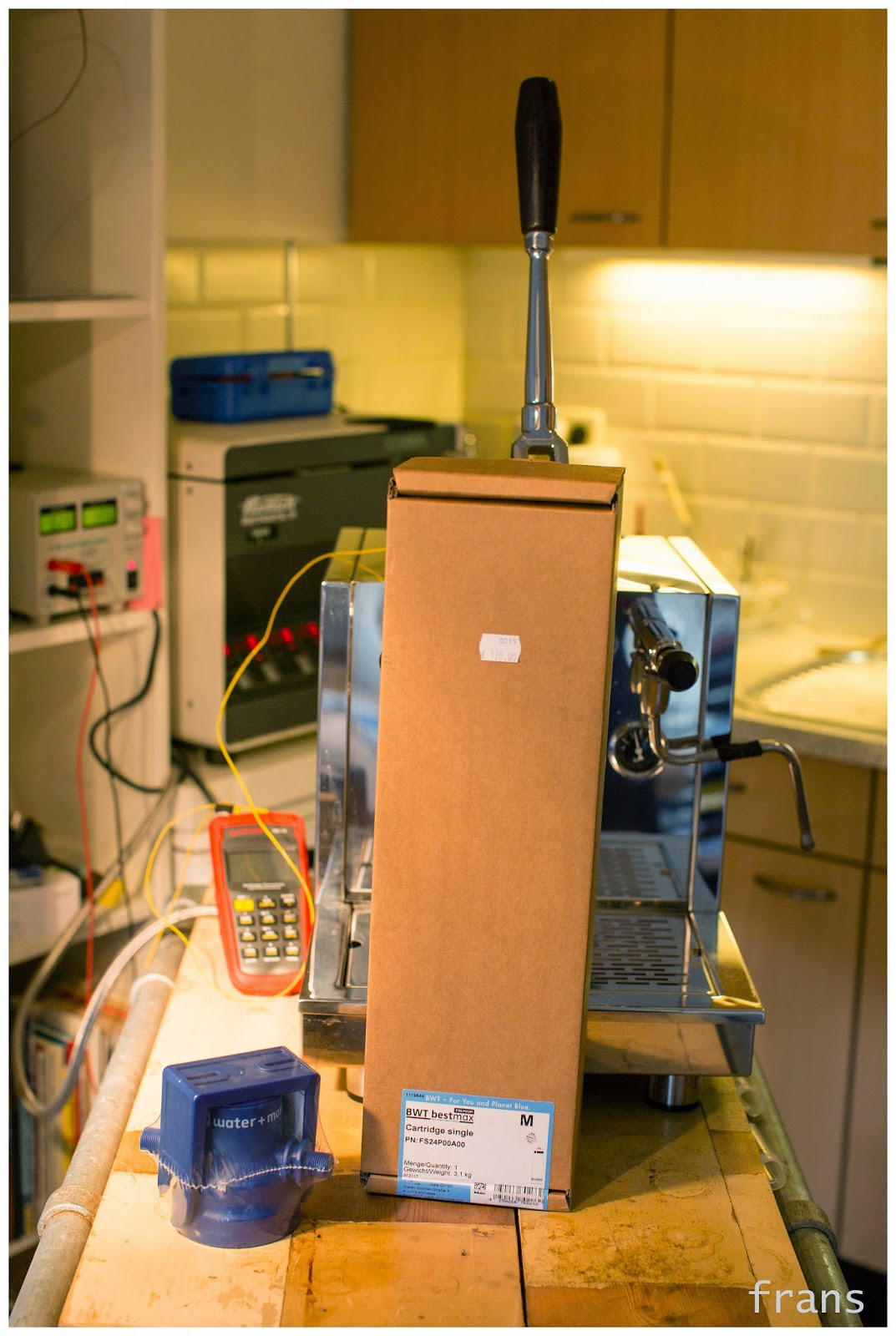 Last week a friend brought me a BWT Bestmax water to replace the DV8 that I had. The advantage of this new filter was that it has a built in bypass so some amount of Ca minerals that the resin in a DV8 and Bestmax replaces with Na / sodium can be mixed back in for a better coffee extraction. Then I read that the newer " Premium " version of the Bestmax filter uses Mg(Magnesium)  ions instead of Na which further enhances the water taste and subsequent coffee extraction. Online, BWT are very brief about what exactly sets this filter apart from the rest. I find that generally, water filter manufacturers are terse in explaining the exact workings and most text has words like rich, full taste, particle-free and pleasant.  I assume manufacturers keep the text vague for two reasons: first, the competition is not to be made any wiser and second, consumers may be taken aback by technical specifics. Anything beyond the absolute necessary, like mention of Calcium ('scales
3 reacties
Meer lezen

Israeli coffee site featuring my "on the road" setup 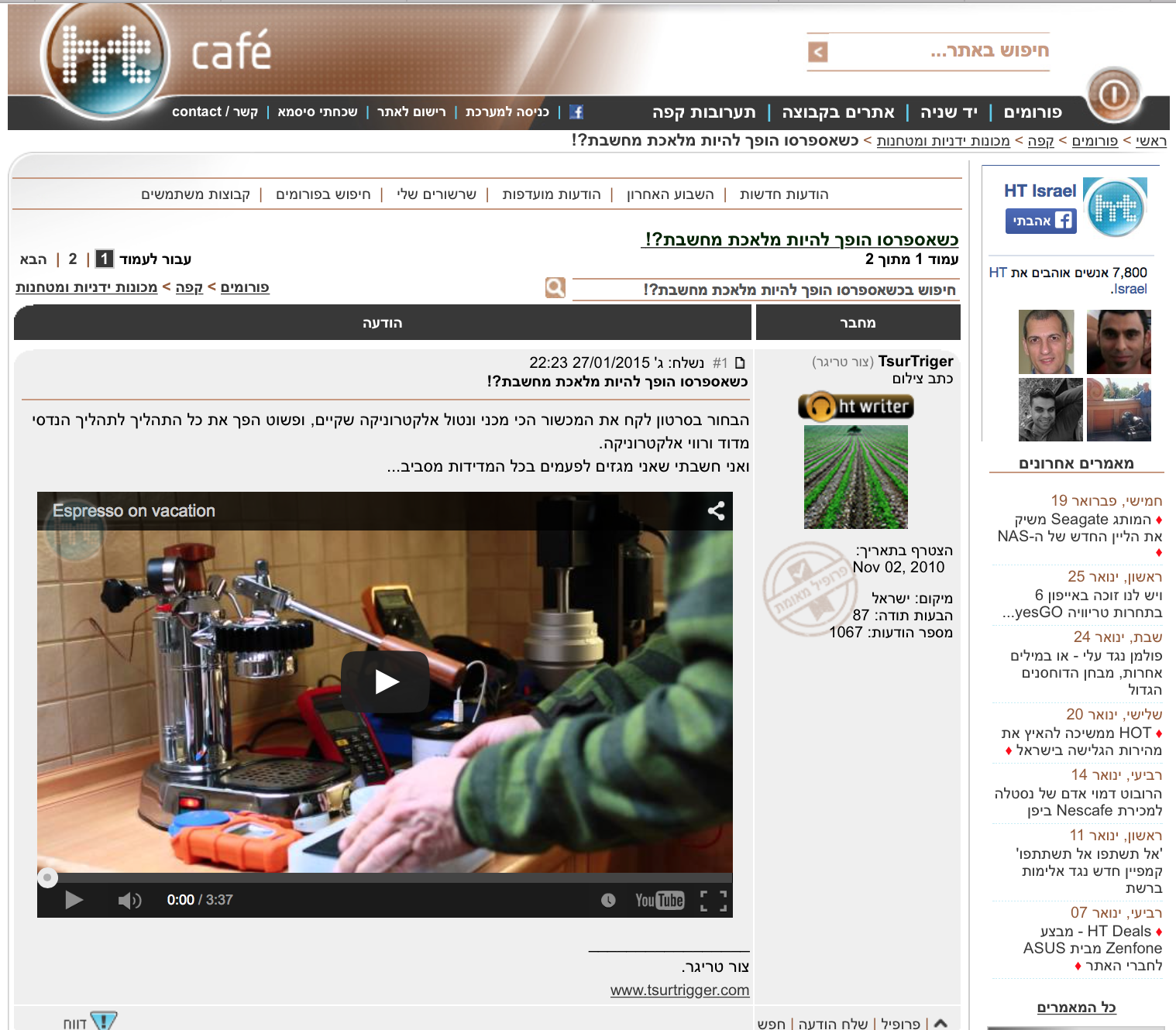 http://www.htcafe.co.il/vt226368.html The current, expanded version of the rig is better ;-)
2 reacties
Meer lezen

When to change the Brita cartridge? 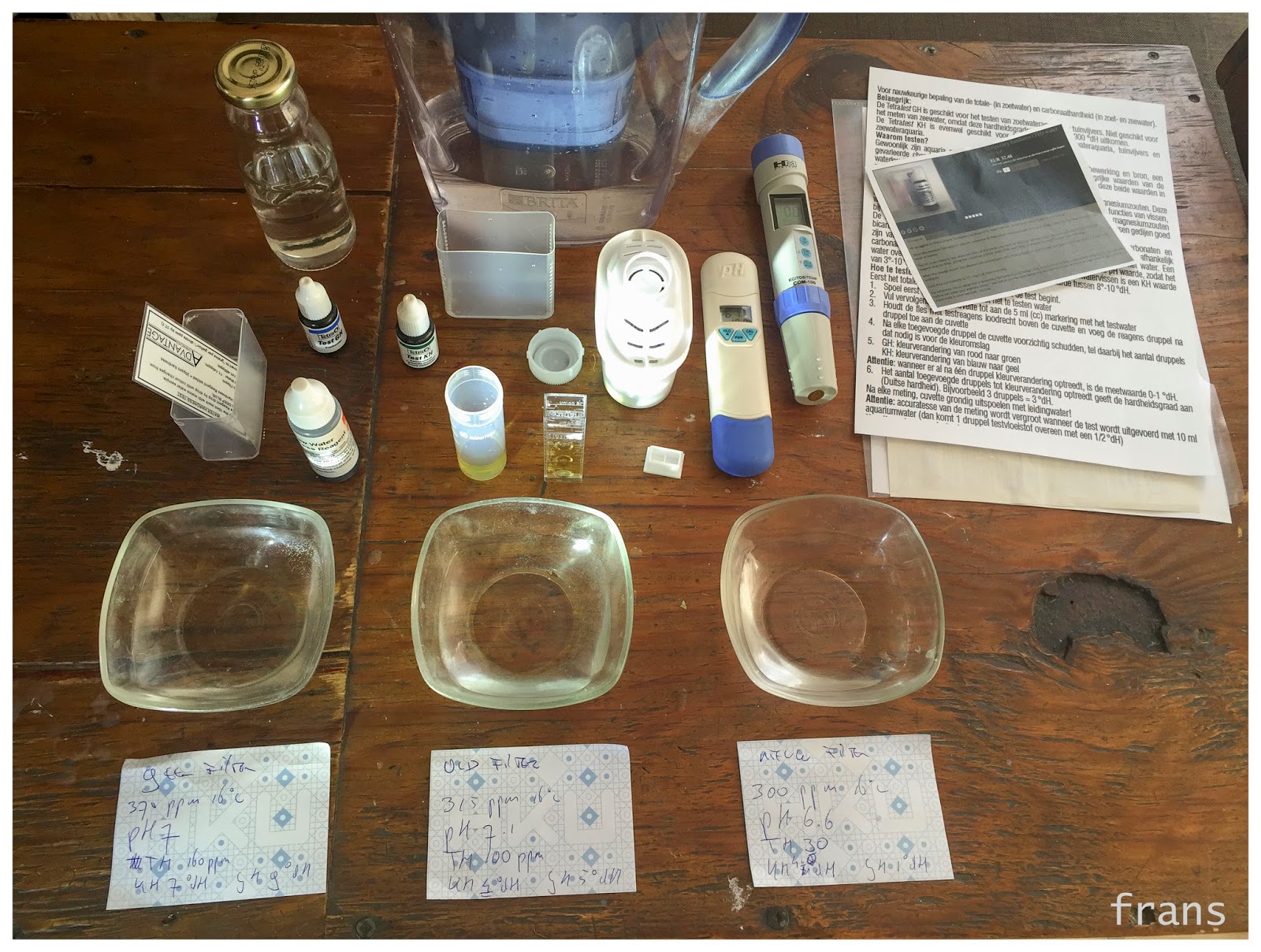 100% to 0% The Rocket Giotto espresso machine at my girl friend's place uses water from a Brita filter . This filter has a timer that counts down from "100%" to zero over a number of weeks but that time span is totally unrelated to the actual use of the filter so it's useless as a reminder to change the filter cartridge for a fresh one. Unpredictable I reset the timer a few times before replacing the filter but then I mostly forget how often I have reset it and I take out a new cartridge when I start to feel worried about the water hardness, which is subjective and unpredictable. Brita themselves suggest replacing it every two months or after every 40 gallons of water taken from the pitcher although local water hardness may vary greatly and thus influence the life span of a filter cartridge. So that's not a great help either. It would be nice if Brita supplied a test kit to see when the water quality delivered by the filter is deteriorating. Predicting
2 reacties
Meer lezen 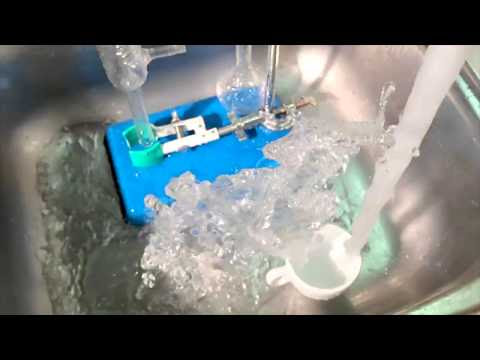 Coffee Night at the Torpedo Kitchen 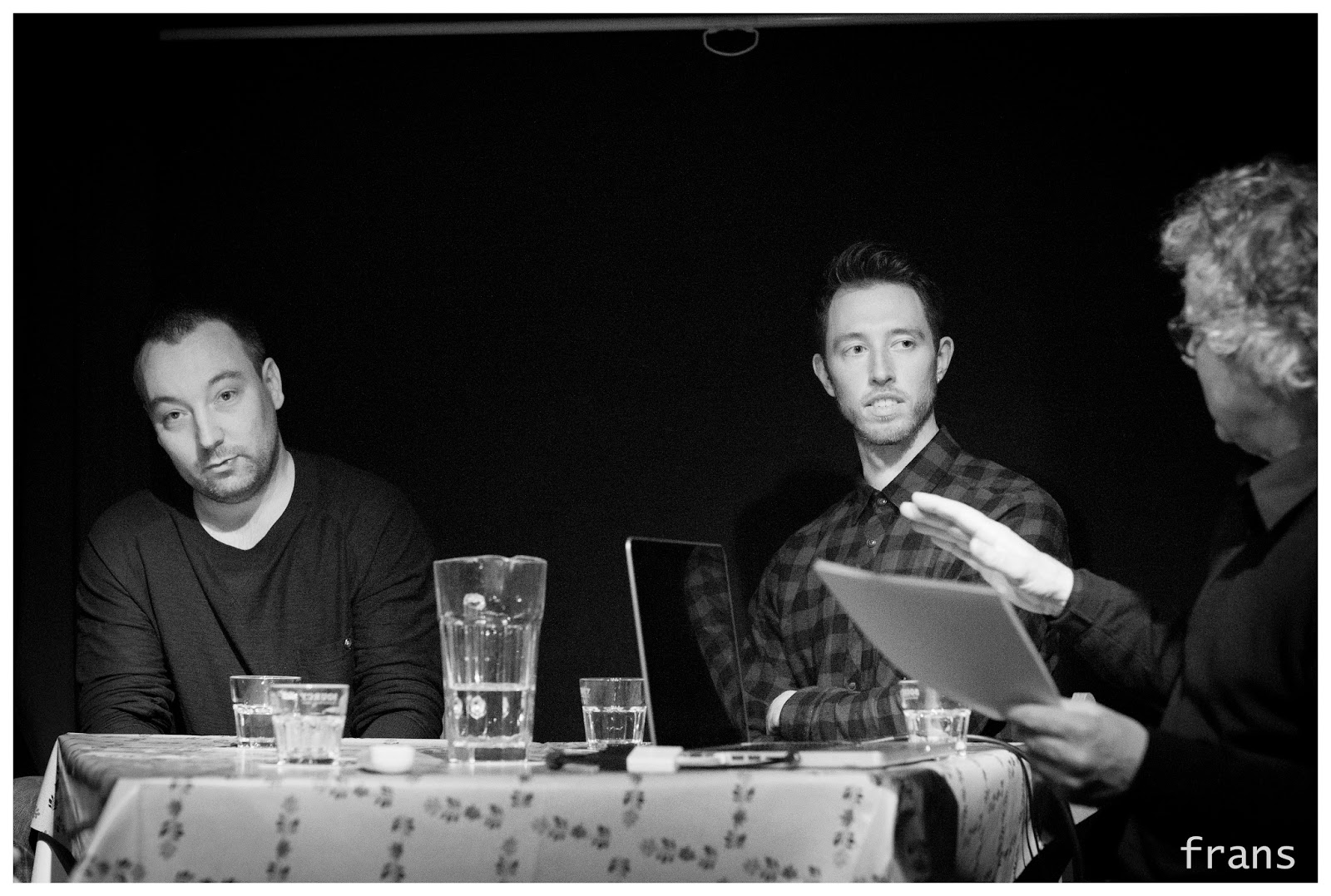 Yesterday night, Foodtube's Ronald Hoeben hosted a discussion about coffee in the miniature Torpedo Theater in Amsterdam . His guests were Edward Beumer and Erik Oosterhuis from specialty coffee place "Trakteren" in the J.P. Heijestraat and Tewis Simons, who founded Bocca coffee roasters with his brother . Most of the recent history and basics in specialty coffee were discussed. Tewis told how a coffee farmer they work with has innovated to be able to offer his customers any of his five varieties of coffee beans processed in any way they prefer. And to inspire other farmers as well, they arranged for a coffee farmer from Ethiopia to travel to this farm in Colombia so both farmers can compare methods an share new ideas. Edward explained how the success of chains like Starbucks, and on a small Dutch scale the Coffee Company have tremendously helped to open the market for smaller more specialized and dedicated entrepreneurs who bring a higher quality of coffee to
Een reactie posten
Meer lezen 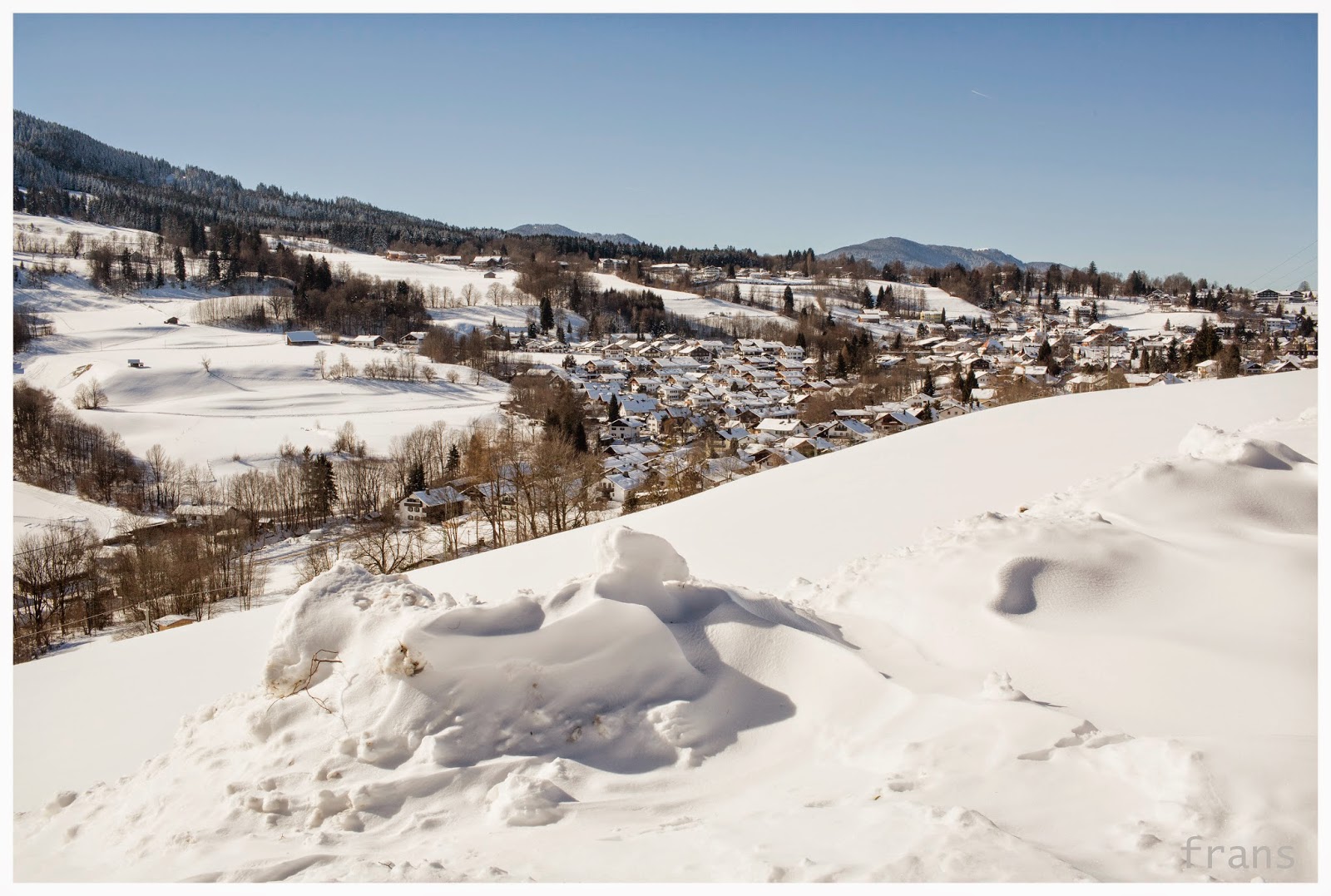 When the sun shines over the snowy hills it does so with almost blinding intensity. Some tracks indicated by my little Garmin Oregon GPS were illustrated around me by animal footprints, confirming that under the deep snow there was some kind of path. Altitude Animal tracks leading the way Landscape art Temperature
Een reactie posten
Meer lezen

Wiles of the Wile 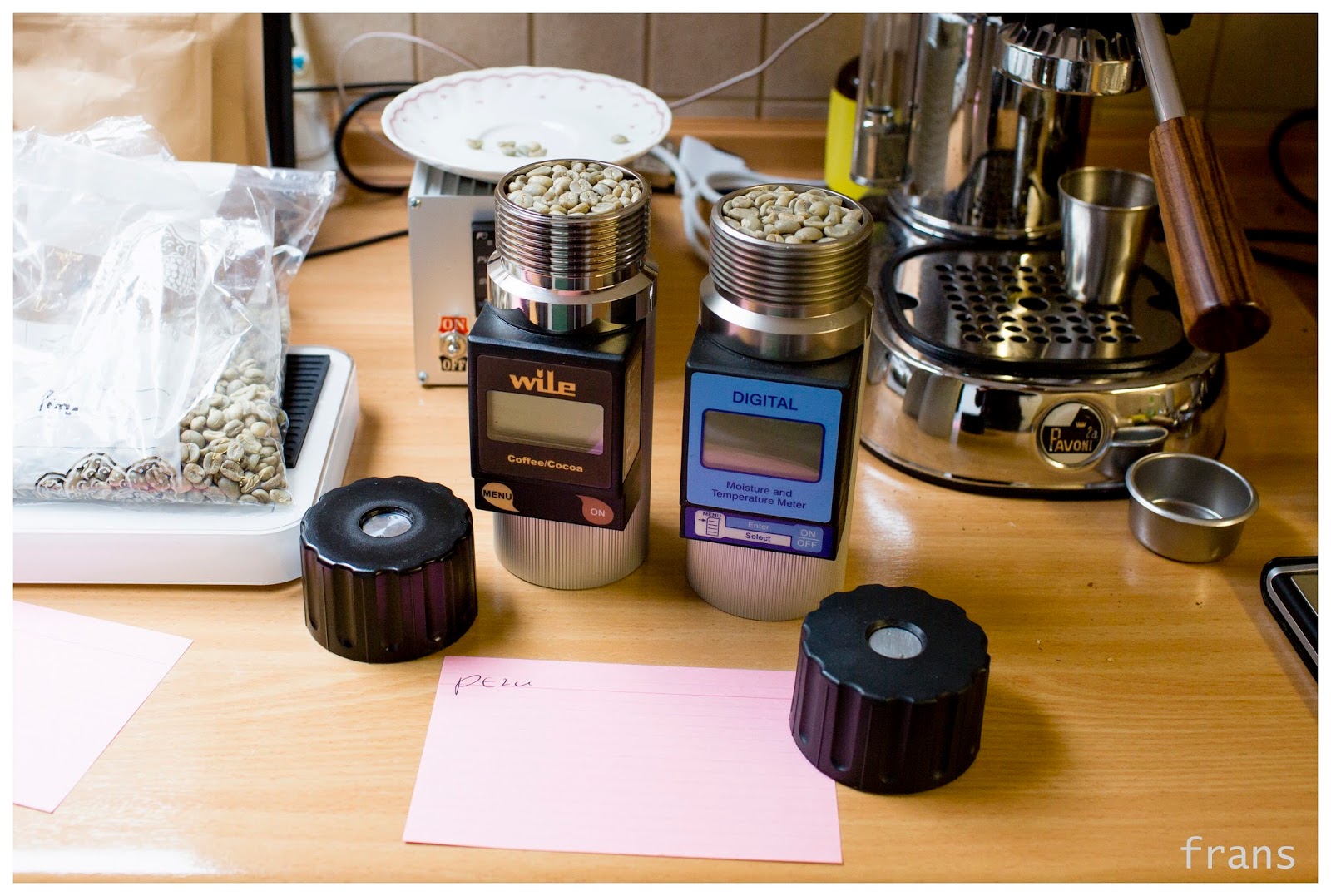 In my recent blog about moisture meters , I described purchasing one on Alibaba. Today a friend came by, visiting me in my vacation "home away from home" in Bad Kohlgrub and he brought along his Wile55 moisture meter which he purchased directly from the manufacturer in Finland. We were excited to compare the two. My Asian "Wile65" seems to be a clone rather than an original as produced for the Finnish company of the brand and indeed there is no logo and "Wile" name on it as there is on the Wile55 directly from the source. The original Wile55 is almost perfectly identical to the clone. The top metal parts are chromed (mine isn't) and thus more shiny. The display of the 55 has no backlight which the "65" has and the LCD displays are also a bit different. The Wile55 is specifically calibrated for coffee and cocoa, the "65" has a long list of grains it measures with coffee at the end of it. We each measured a number of gree
Een reactie posten
Meer lezen

Mount Hörnle: hike up, cable down 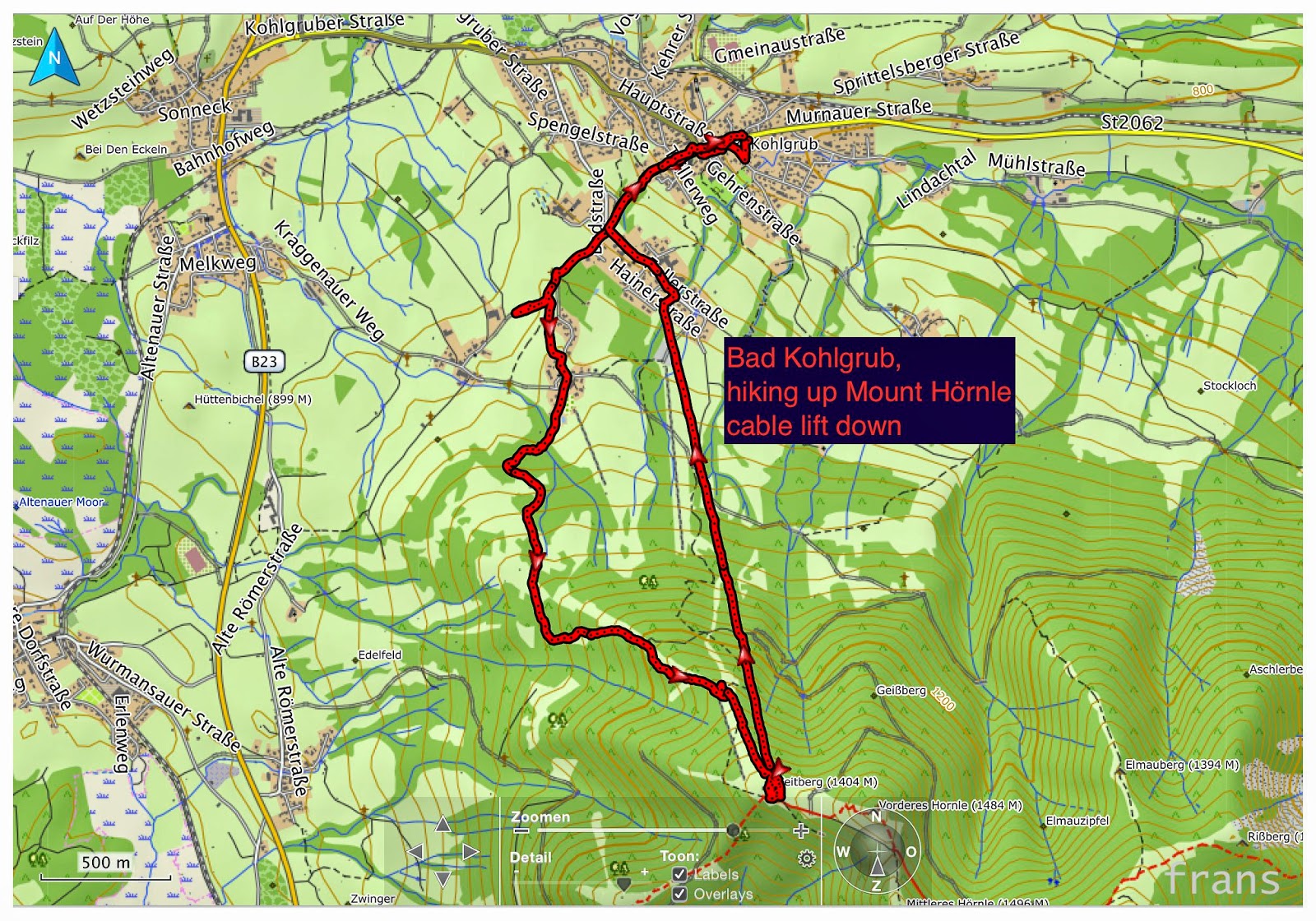 After I had a few espressos the sun seemed to temporarily break through the mist so I stepped into my hiking boots and followed a track which I'd planned in the little Oregon 600 gps from Garmin. The steep path up with a gradient of 20º taking me from 830m above sea level to 1440m proved enough of a challenge for me to decide to take the cable lift down instead of hiking down on the other side of the mountain, which was a designated ride for fast sleighs anyway. The views were magnificent. Altitude Was surprised to read the high temps but turned out the temp tag was snug against my back for 3km Skipped the hike up to the highest point Ready to go back Back in the village
1 reactie
Meer lezen
Meer posts