by Tije de Jong Trial and error A few days ago I made a first successful attempt to improve the PID settings on the roaster. I’m certainly not an expert in this: I have only a faint idea of how a PID works, and what the effect is of each of the P, I, D-vaues. Therefore, a bit of trial and error seemed the best way to go for me. The settings I had been using since we fist got the roaster to work  (P=1.0  =I=0.5   D=0.0), didn’t lead to the desired controllable roasting process. In particular during the drying phase, where the inclination of the profile is rather steep, I had to slide the background back and forth in order to get the machine on the right track. Once passed dry end, the system gained some stability. D for derivative I was told that the P-value could be regarded as the gas throttle of the machine. The function of the I and D were still a mystery to me. At first I tried increasing the I, which gave a slight better control, but still not satisfactory.
6 reacties
Meer lezen 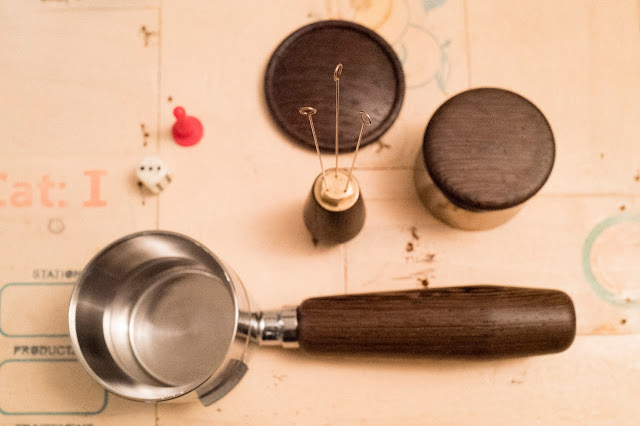 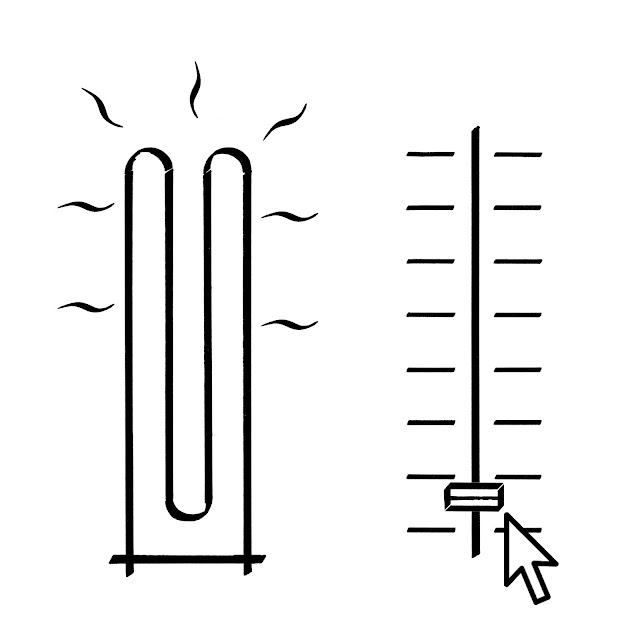 Slider low for modest heat radiation (illustration by Tije de Jong) --- Slider high for intense heat radiation (illustration by Tije de Jong) ON or OFF In the default configuration, each of the three heating elements of the FZ-94 roaster can be switched on and off individually and in many cases this provides a good level of control already. Gradual effect Since it takes some time for an element to get up to full radiating power after it is first switched on and since it gradually decreases heat radiation after it is switched off, this enables a cautious and understanding operator to strategically switch elements on and off for a smooth effect on the roast. For instance, switching off the centre element and increasing air flow 25 seconds before the anticipated temperature surge of First Crack would mostly work to prevent an overshooting Bean Temperature early in the development phase right after FC. The fiery one in the middle The heating element in the middle is also
Een reactie posten
Meer lezen

- maart 11, 2017
For her recent Coffee Awesome podcast, Bjørg Brend Laird talked with Trish Rothgeb who started out as a barista way back in 1986 when in California it was possible to make enough money as a barista to pay for full art tuition at the university. Self taught Since her boss was more interested in playing golf than in roasting, in 1990 Trish taught herself how to roast. Dark roasts, fighting fires, no training, no bean probe, only the "analog dial temp for the smoke and a stopwatch" sufficed. Four years later she moved on to roast for other small and medium sized companies. Oslo Roasting became a career around 2000 in Oslo, Norway where she found a job roasting on a small 12kg Probat, fitted with a Watlow box to read bean and smoke temp. Still very dark, thick Brazil / Indian roasts, chewy and robust in taste. What was a called a medium roast then would today be seen like French roast. The 'dark middle ages' of coffee are not really far behind us, it seems.
Een reactie posten
Meer lezen

- maart 11, 2017
Some video footage of Ram E. Evgi of Coffee-Tech demonstrating his wood fires roaster at the Coffee Consulate in Mannheim, 10 March 2017. My iPhone video was edited by Roemer Overdiep remotely (controlling the laptop in my home over an internet connection from his home).
Een reactie posten
Meer lezen

Roaster Round Table at Coffee Consulate 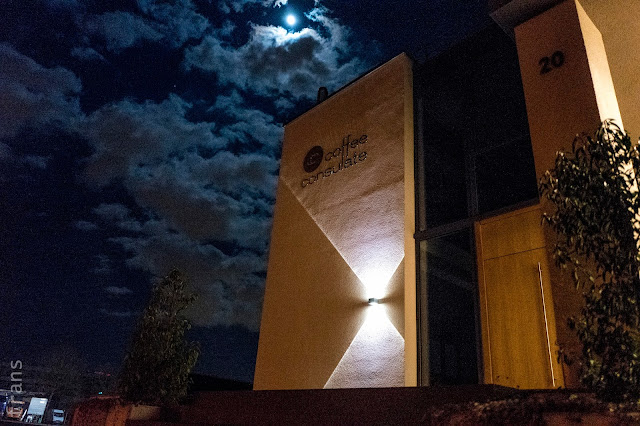 Coffee Consulate by night On March 10, 2017 the international Rösterstammtisch was hosted by Steffen Schwarz of the Coffee Consulate in Mannheim. Ram Evgi from Coffee-Tech in Israel also attended and he demonstrated his wood fired roaster. In the upstairs conference room, Marko Luther gave a presentation about Artisan and Tonino . In the espresso room, everyone made and shared espressos. Most roasters present work with 5-25kg roasting machines. One just started her roastery and sold her first pack of beans last week Saturday, many others talked about expanding, buying bigger roasters. One used his roaster to roast cocoa beans. Steffen shared stories from his pioneer years in the SCAE and the first World Barista Championships, and his view on today's developments. In his cool basements an immense collection of green beans, often from very small lots like three 30kg bags, were to be found. A few pictures: Welcome by Steffen Schwarz Coffee-Tech Solar lined up
Een reactie posten
Meer lezen
Meer posts