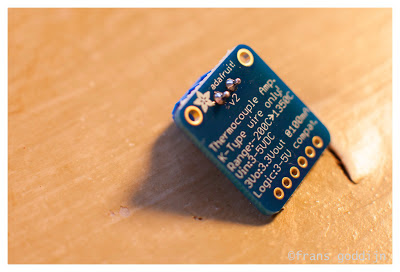 How nice that Adafruit prints some basic info on the back side of the stamp-sized MAX31855. I first soldered on the blue unit that takes the K-type temperature probe. Next, the comb of pins that will have 5V and ground and the other connections with the Arduino board: one line for the Arduino to beat the time for all activity on our little blue island, one for the Arduino board to tell MAX when to check the temperature probe and report what it says and one data line to hand in the reports to Arduino. The mini MAX sitting on the breadboard ready to be wired. To the left next to it is the much more minuscule and vulnerable TMP36 IC which did temp measurement until now.  Wired up, time to hook it up. The probe strapped to the hot brew group of the Ponte Vecchio Lusso 2 espresso machine. The circuit reports room temperature (well it's actually the internal temperature of the chip living on the blue MAX island but over there it's about as warm as it is here) and the t
3 reacties
Meer lezen

Blue is the new green 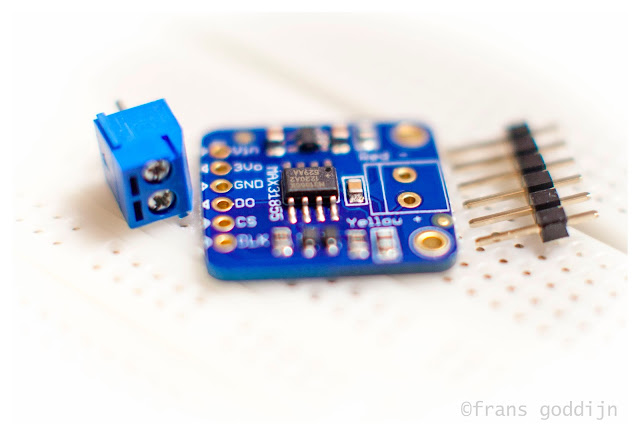 A new component arrived in the mail. Very tiny. One could accidentally swallow it without chewing. I like its name very much: Thermocouple Amplifier MAX31855 breakout board (MAX6675 upgrade) - v1.0 .   It sounds very serious and ' MAX ' seems to suggest that one shouldn't underestimate it just because of its size. I also like the 'Red' and 'Yellow' reference on the blue board. Bold enigmatic statements on a blue board. I can see it on display in a modern art museum, on the wall, a Swiss magnifying glass suspended on a wire beside it. By the way where did the blue come from? I remember such boards with the connections printed in thin copper, often home made and etched out in acid, used to be rusty-yellowish and later green but all of a sudden it's blue all over. Do the really hip board designers call this Arduino Blue?
4 reacties
Meer lezen 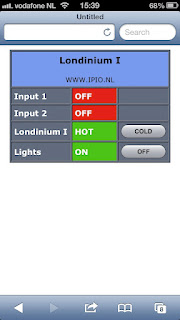 When I was at my girlfriend's house and I showed her teenage daughter that I could now, using my iPhone, switch on an espresso machine in my home a few kilometers away, I had expected her to be impressed but instead of showing her amazement she just walked by, rolling her eyes and asking “ has everyone gone mad here?” Still I thought it was quite nifty. I can now switch on the machine when I'm heading home and I will be able to pull my first espresso right after coming in. I even added another cable to the box  and now I can also switch a set of lights on and off when I'm not home. The box is programmable for dozens of on/off times but I can add some spontaneous extra movement there to convince any burglars that there's really a live person there.  Plus, my youngest daughter who lives in Australia is able to alert me if she's made a new move in the Wordfeud game we have on. When I'm slow in responding, she switches the kitchen lights on and off, so if
Een reactie posten
Meer lezen
Meer posts