See also: http://www.byleew.nl/coffee/tiny-fluid-bed-roaster-new-edition/ and http://kostverlorenvaart.blogspot.nl/2016/08/tiny-cheap-fluid-bed-roaster-jans.html   Tije designed and constructed a new roast chamber, Jan worked on new Arduino & Artisan control boards en we got a new blower since the earlier one is only available occasionally which does not work well for production. The Artisan software worked well! TC4 source: https://github.com/greencardigan/TC4-shield/tree/master/applications/Artisan/aArtisan_PID/branches/aArtisanQ_PID_6 During this first test, we found that the blower control does not work optimally as it blew out two SSRs before we reverted back to manual Variac operation of the blower. The PID settings to control heater intensity also needs some work and Tije has already (while I was editing the video) worked on a heat isolation of the roast chamber. More updates soon!
15 reacties
Meer lezen 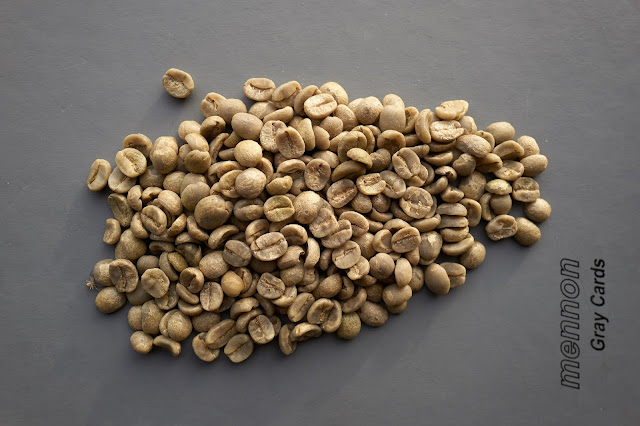 Beans on a grey card to ensure correct color. Measures moisture 9.8% With the Guatemalan beans all gone and the Ethiopians still in transport, Arnoud Kruiver from Hoofdkwartier is so kind to help me out with 19kg of quite interesting and promising beans from Brazil: Primavera from grower Ricardo Tavares in the Minas Gerais state, Chapadas de Minas region. The information leaflet PDF explains that "the Chapada de Minas is a small and beautiful region with stunning topography shaped by plateaus and river canyons. The flatter plateau areas promoted the mechanisation of the region's coffee plantations. Coffee cultivation began in the 1870's, which brought significant economic benefit to the region by increasing employment opportunities. Among all coffee regions, this area is the most important for small producers and is essential to the local economy. Most of the coffees from Chapada de Minas are natural processed, but washed coffee processing is growing and has beco
Een reactie posten
Meer lezen 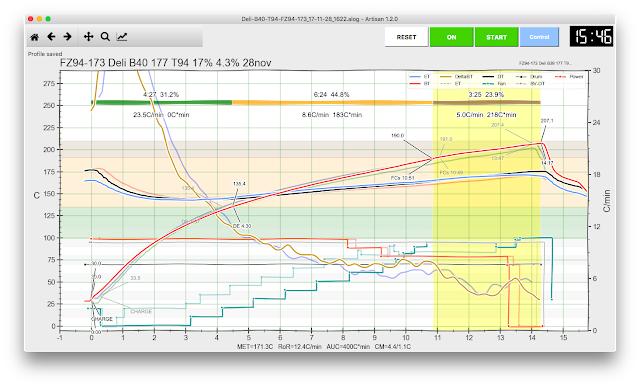 (I will be adding this to the earlier blog about roasting Las Delicias ) Las Delicias, Batch 40, DT at start of roast 177ºC, Tonino value after roast #94, weight loss of beans 17%, moisture in roasted beans 4.3%, date 28 november, AUC=400 Wrapping up this year's roasting of Guatemala Las Delicias beans from the farm of Manolo Muralles. Batch #40 was done today, finishing off what I had. 40 x 1.25kg in, 1kg+ out. Batch #29 was done with the probe in the machine while warming up but after that one I kept the BT probe out and inserted it at the same time as charging the beans into the roaster so then the BT probe can be expected to more closely and realistically tracking the actual Beat Temperature. Of course the BT probe basically just measures the perceived temperature at its insertion point, influenced by the speed of the rolling mass of beans that is twirling around the probe, also influenced by the air flowing in from the low front of the drum space, mixing with the
1 reactie
Meer lezen 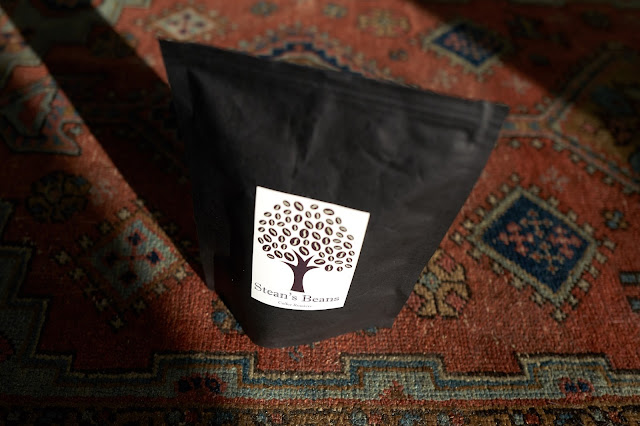 Earlier this week, two coffee pals came over to chat and work. Norman, a Q-grader working at coffee trader Douqué group  brought three sample roasts with him. He had roasted these in three very different ways, aiming for an identical roast color. For his sample roasts he uses a vintage 5 group Probat gas heated sample roaster and operating these is largely intuitive with only rudimentary electronics involved and each of the groups has its own quirks to live and work with. Stean and Norman also tasted my current Guatemala Las Delicias roast of beans grown and harvested by Manolo Muralles and they liked it a lot, which I am very happy about considering Norman's status as Q grader. Norman sent me his notes which I gladly post here (translation below): De Las Delicias was... delicieus, als een luxe praline ;-) Best zacht en macadamia qua boterig mondgevoel en hazelnotig qua flavor. Goede balans met aciditeit ook. Salted caramel. Niet té Braziliaans (pinda)notig dus.  The Las D
1 reactie
Meer lezen 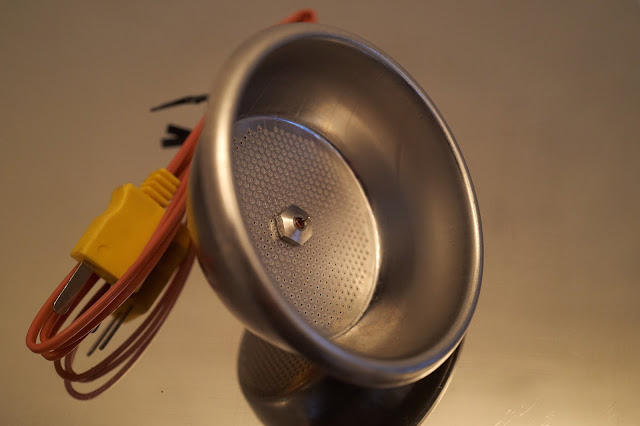 A client of mine wants to study the temperature performance of his espresso machine and I put him in touch with Tije who modified a filter basket for him to hold a FLUKE 80PK-1 k-type temperature probe. The nut at the bottom allows the probe to be positioned higher/lower in the coffee puck. I think it looks great.
Een reactie posten
Meer lezen
Meer posts