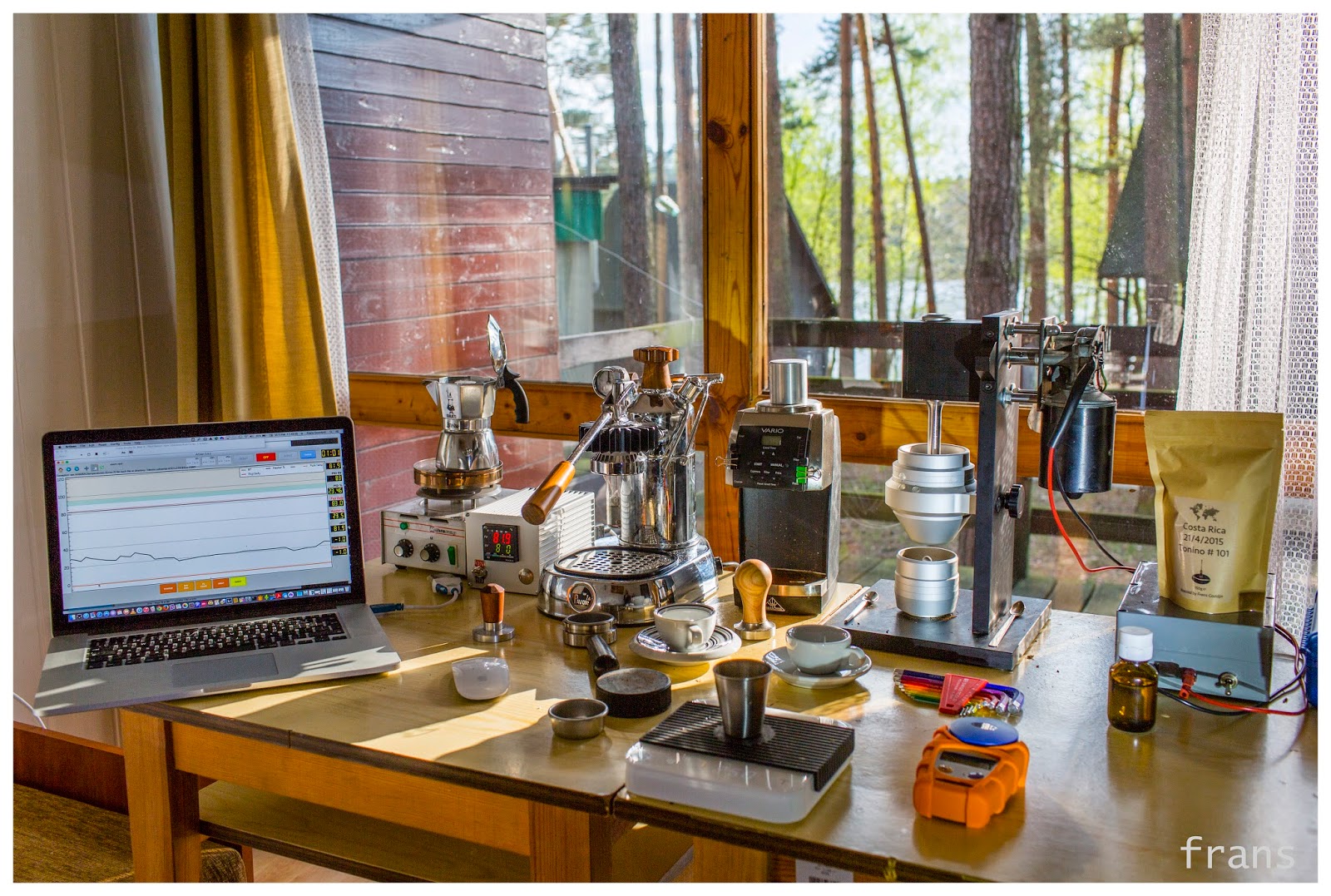 Log cabin coffee corner Knowing about the small collection of coffee equipment that I take along when I'm traveling, Martin Schröder ( pictured in a red coat in a previous conference) pointed me to a remarkable piece of literary fiction by Charles Stross about a secret society of coffee aficionados that started at an assembly in the residence of Oscar Wilde with a history spanning more than a century. It's a story in a collection entitled Toast. The book has gone out of print and the author has made it available for free in several versions: http://www.antipope.org/charlie/blog-static/fiction/toast/toast-intro.html The club of coffee connoisseurs consists mainly of technically inclined males, just as present day coffee forums are primarily the domain of men with tools and lab equipment. "There are no artists, and precious few philosophers in our club." writes the secretary in 1939. The annals of the club reveal how several technical inventio
2 reacties
Meer lezen 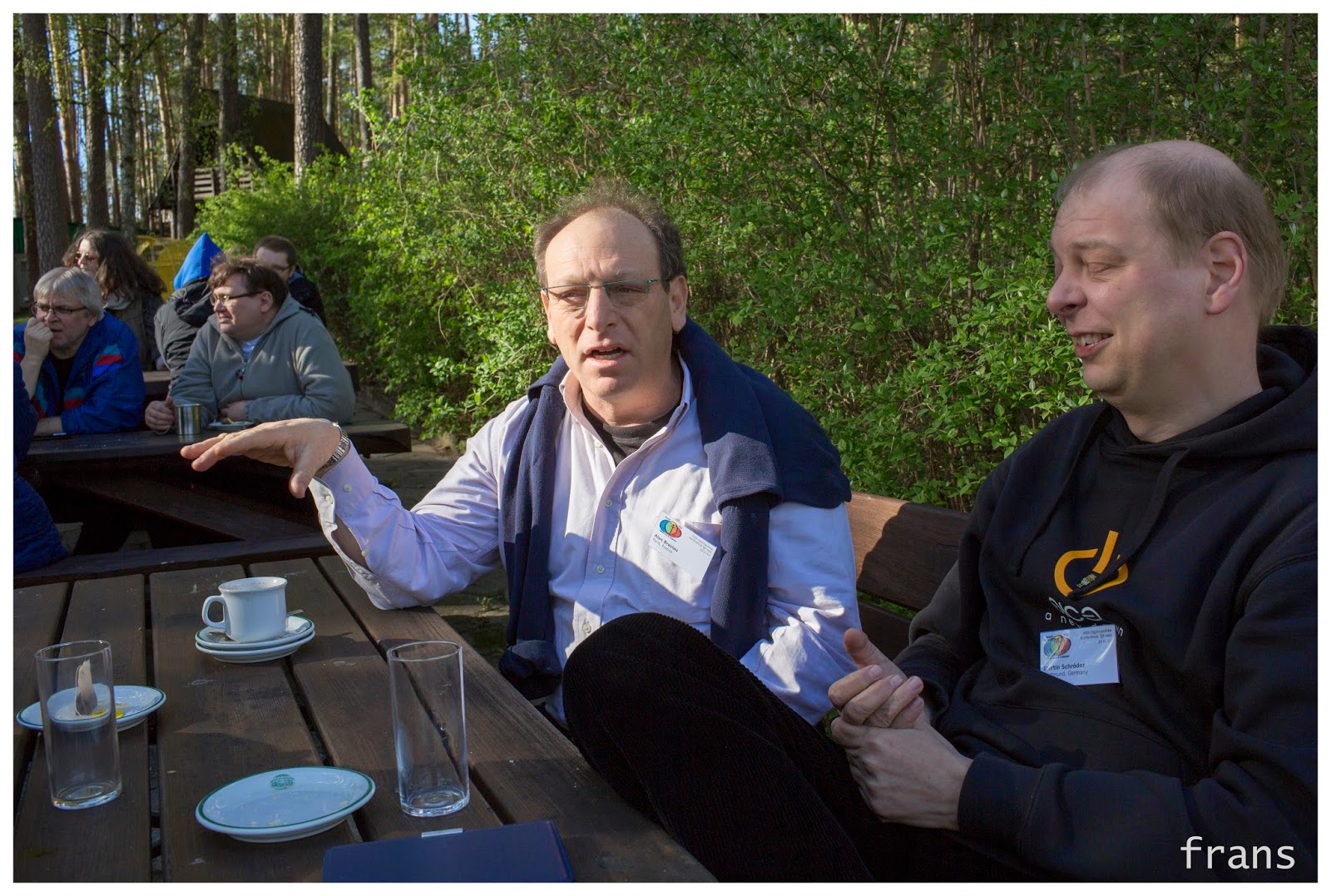 One of the frequent participants of international TeX conferences is Alan Braslau, an American researcher in physics. The first time I met him, he presented a project he had worked on, mapping and analyzing patterns of usage of electric energy by households in France, most of the energy coming from nuclear plants. Alan Braslau (center) during a coffee break at BachoTeX2015 One detail that stuck with me was that he predicted years ago how old fashioned light bulbs would be banned in favor of "environmental friendly" lamps to save energy. He explained that old fashioned lamps "lose" energy by giving off heat but for most households in moderate European climates this is useful because when the lights are on, it's usually dark and cool outside. Today, the warmth that the cheap old light bulbs used to give us has to be generated by heaters so part of the energy saved by the expensive high tech lamps is indeed not really 'saved' but just lost in a dif
Een reactie posten
Meer lezen

Tasting a Roast Without 'Cupping' 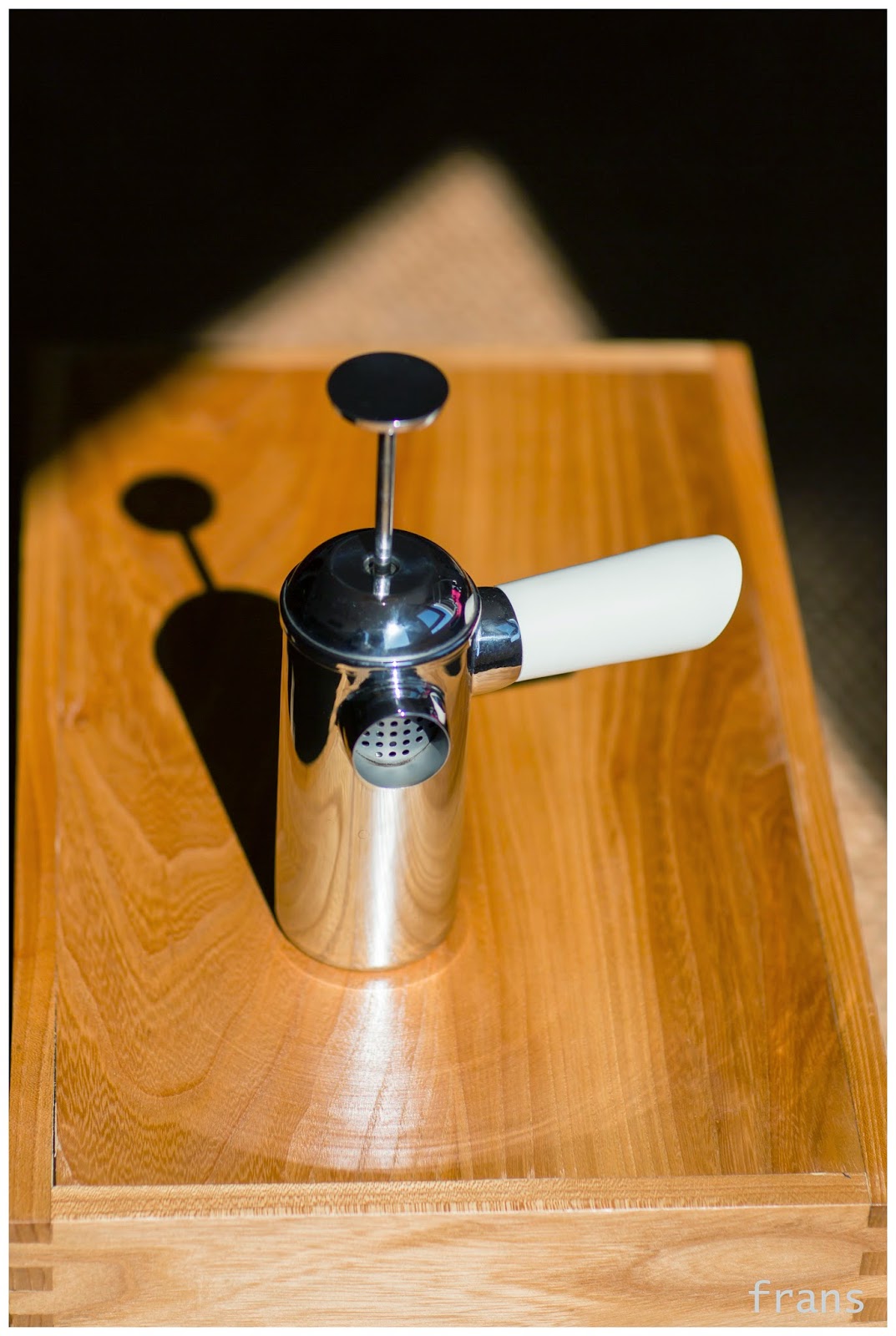 Reading about cupping and attending a few cuppings with experts hasn't given me the confidence to do any of it myself. In a cupping company I am primarily concerned about avoiding someone else's mucus on my spoon. Still it would be handy if I could do something like it to taste my own roasts right after roasting. Presently I take 10g of beans right after cooling down from the roaster, grind it (always the same grind setting on the same grinder) and measure it using the Tonino. It gives me a number that tells me how much darker / lighter this roast is than another one in similar circumstances. The grinds then sit on the table for a few hours before I throw them out. Sometimes they yield a mesmerizing coffee perfume and sometimes hardly any smell comes off. This also helps predict how the espresso will be a week later, especially if I save three different samples of roasts done in quick succession. If one seems dead to my nose, the other sends out plain 'coffee' aro
Een reactie posten
Meer lezen 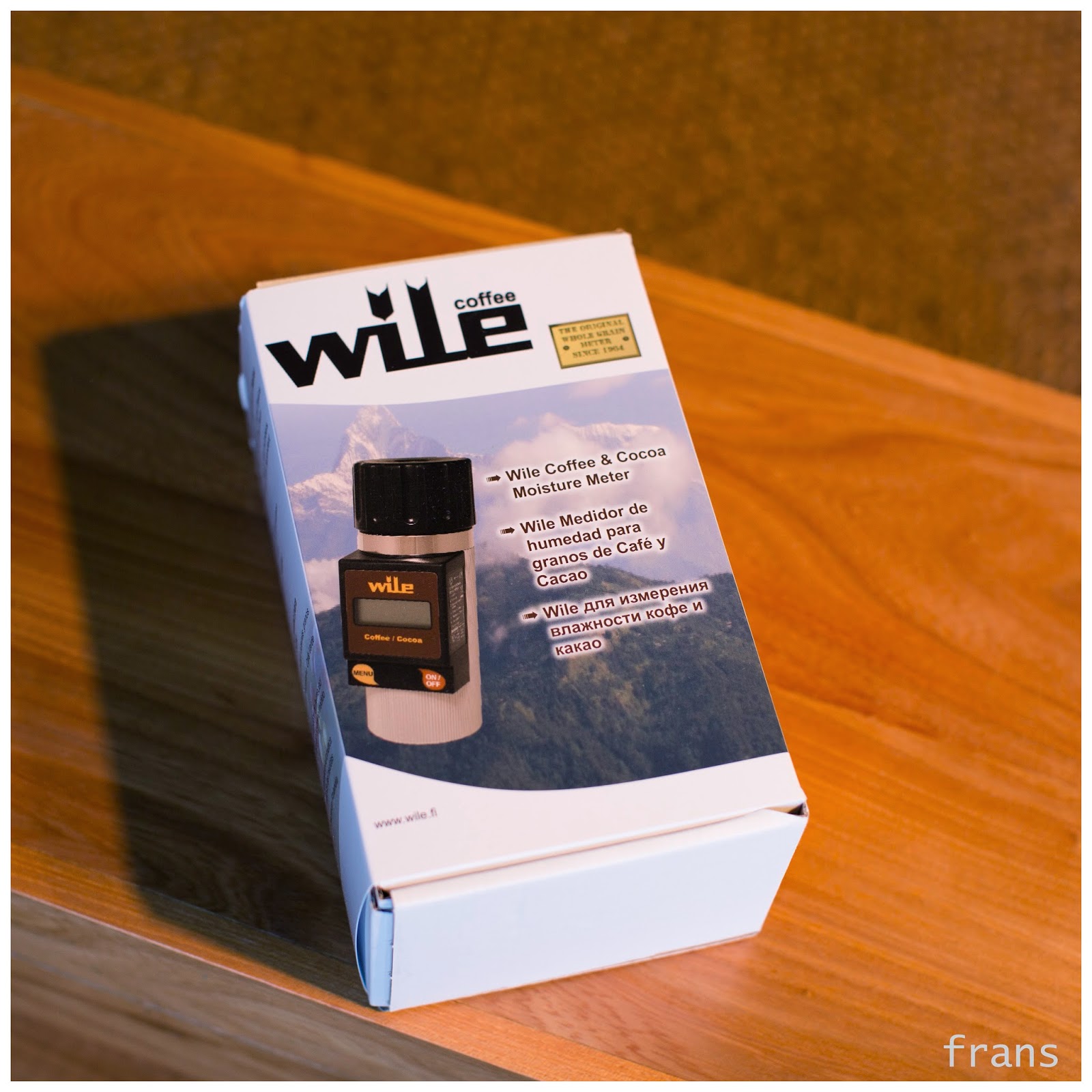 After first trying out a fun Chinese copy (which was not very accurate) I got the Real Wile Thing now:
Een reactie posten
Meer lezen 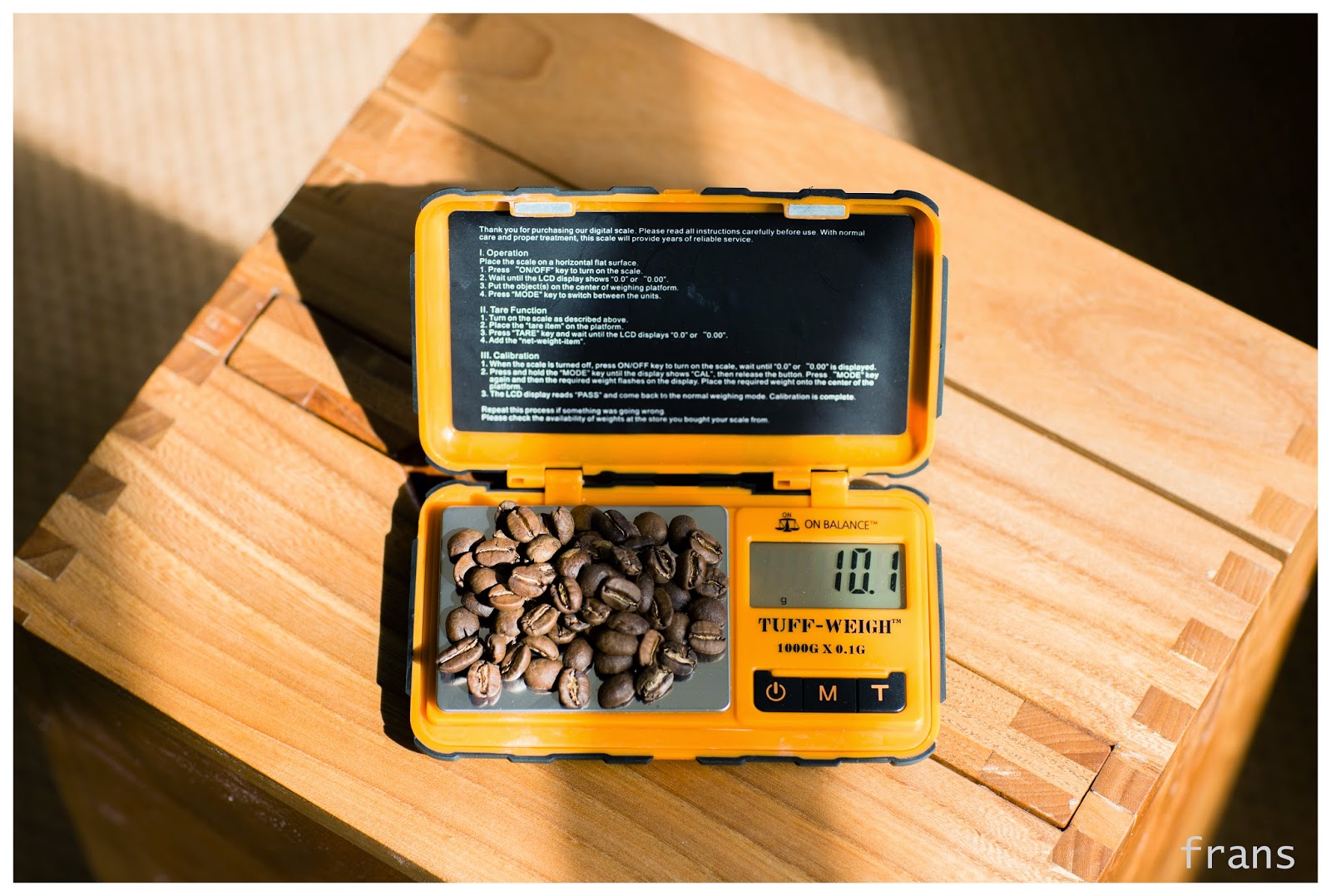 The new fantastic Lunar scale by Acaia is not available yet but there's another little scale that looks great I think. It's most likely not as water proof but it promises to endure some rough treatment. And it's very cheap: mine was just € 13,50 (ex shipping)  from one of the online stores specializing in home growing of plants. Good for coffee too! PS they have a 0.01g precision version of the same scale now as well.
2 reacties
Meer lezen 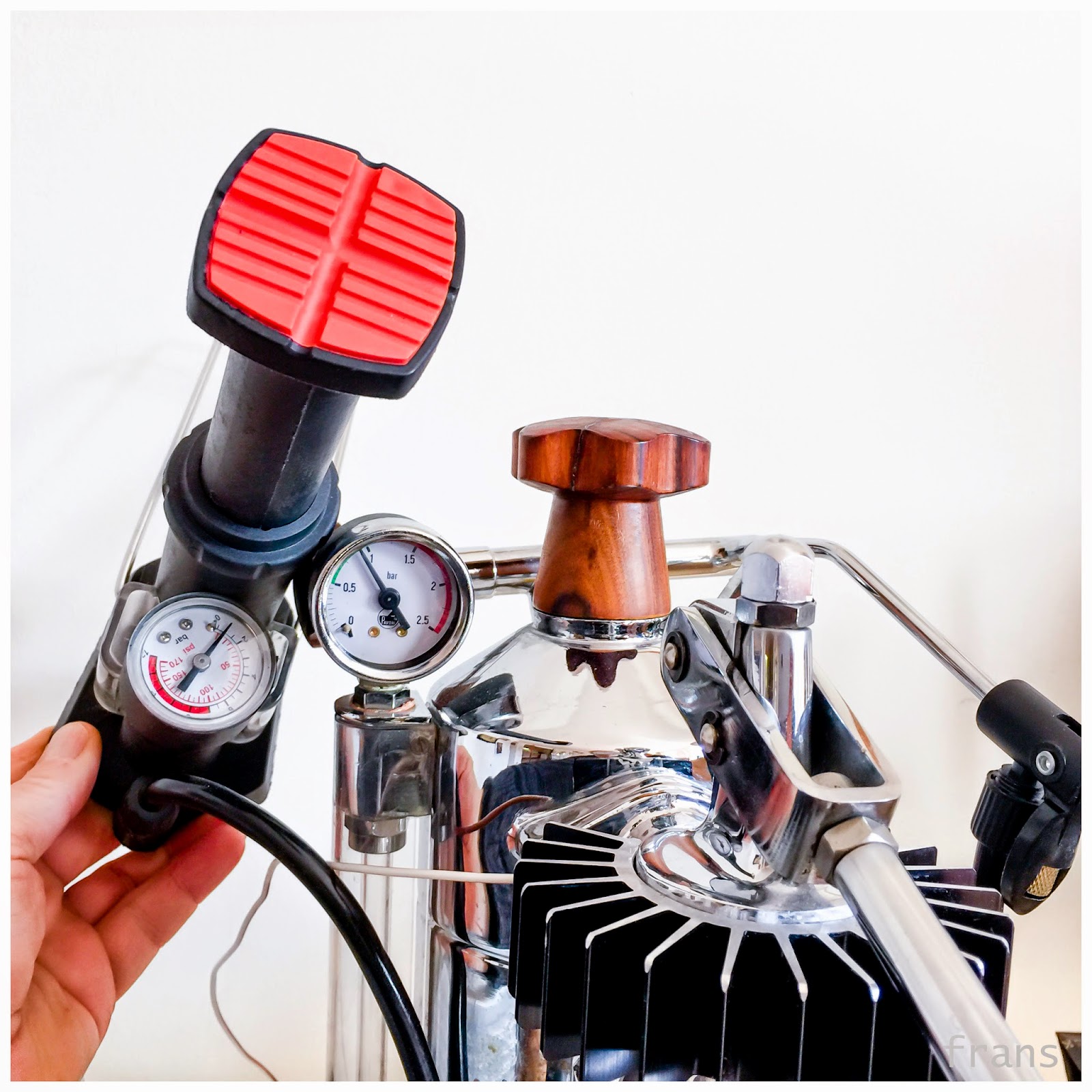 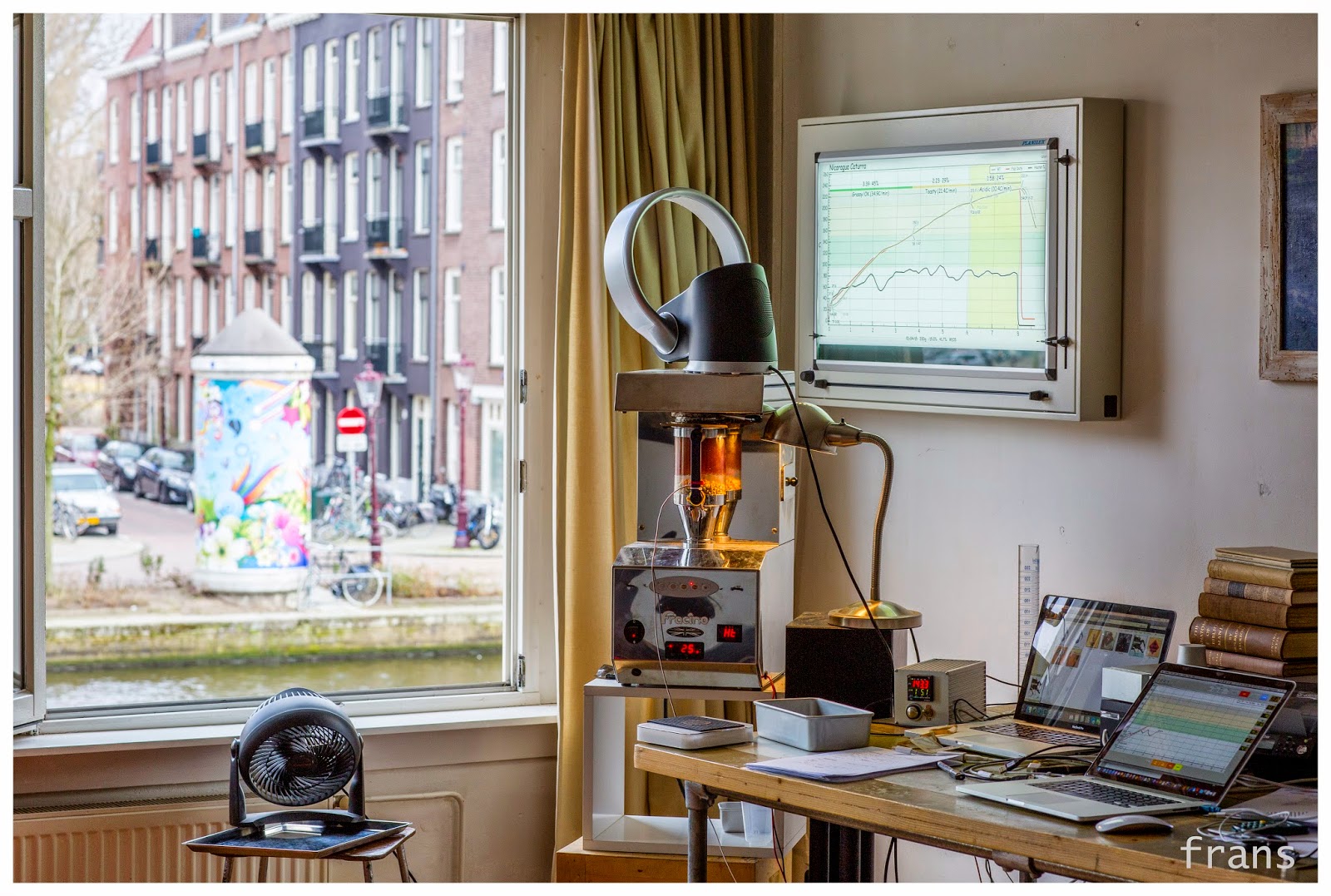