- december 08, 2018
Egon van Kampen restored a 1950s vintage RACAL RA17 receiver for me, testing all components, replacing a bunch of them, and recalibrating sections in the receiver. Egon van Kampen can be emailed at egonvk@hotmail.com - also thanks to Arno Wies for referring me to Egon!
This receiver belonged to a man living on Overtoom, near my home here in Amsterdam NL and after he passed away, his widow and daughter cleared out his radio shack in the attic. At the time, a matching oscilloscope was also available but I did not yet know how unique and special that was...


The Racal is an established name in British communications.The name Racal was derived from the first names of the designers of its first receiver: Sir Raymond Brown and George Calder Cunningham. These former Plessey employees started the company in 1950 as Racal ltd.
Racal was the first commercial receiver manufacturer to fully embrace the famous Wadley loop circuit that stabilizes the received frequency and eliminates drift. This ingenious circuit was developed by Dr. Trevor Wadley of South Africa.
Racal Communications had several assembly plants throughout the world. Racal often slightly changes model numbers or adds a suffix based on country of manufacture. The American made RA71 is similar to British made RA17. Likewise with the RA117 and RA6117A. The tube line-up and other circuit differences were adjusted for the location where the receiver would be used.
Racal continues to manufacture modems, receivers, transmitters and other advanced products for the military and commercial sector. The company was acquired by Thomson CSFG in 2000.
The Racal Handbook by Rinus Jansen is recommended.


In his email about finishing the restoration Egon van Kampen wrote:


The RACAL has been at work here all evening and all is well. Just now an American Ham Radio enthustiast came through from Georgetown USA.
It was quite a job but I'm happy with the results.
This spcecific build variety was probably used by the navy, judging from the connectors. I recently restored a similar specimen for MARAC to be used in their setup of a radio hut on a minespweeper.
Someone has been heavily tinkering with your RA17 so it took a lot of time to recalibrate.
Electronically this is one of the most beautiful and original RACALs that I've had the pleasure to work on.
Be very gentle with yours because in this condition they are becoming very rare.
I cleaned up the looks as well and I have put a RACAL badge on the front where there was some damage to hide.
Hope you like it ;-)
All tubes were tested and only two needed to be replaced. Plus a lot of parts which were now out of specs.
I will include some instructions for use so you will be able to optimally use this beautiful, special receiver.

A good friend from Phoenix writes:


Very interesting to read MARAC's page. What a nice job your
tech friend did. I worry that the internet will replace these
creatures and the zilching, hissing and clicking languages will
be as lost as one of those celtic languages spoken by one great- old
grandmother on an island. Reminds me of ham shacks at summer camps
and my younger brother working with his own ham licenses although
he finally settled into the more casual 2m lifestyle which
was quiet and hand held talk with fairly local people.
Middle of the night snippets of People's Liberation propaganda
conversations (sometimes "shortwave" sometimes actual  communication)
was exciting during pre-adolescence).

PS trivial fun fact: Bryan Lewis Saunders did an experiment, taking a number of different drugs and then creating art to show the possible effect. Besides some mild brain damage, this yielded a series of works, one of which (when taking butabe honey oil at an unknown dose) showing a morse code key in his head: (source: INSIDER) 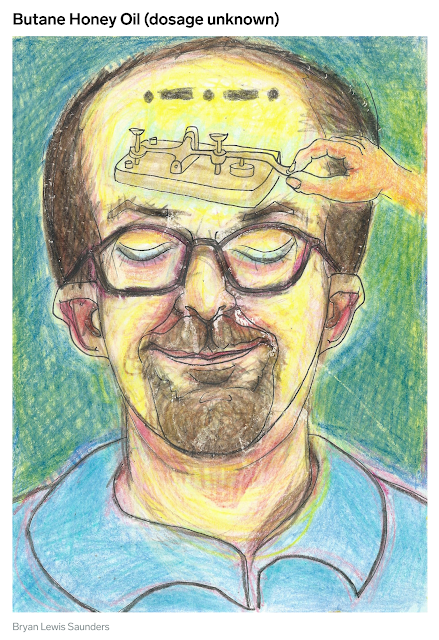 The code sent ._._. stands for New Page Signal, AR digraph, Message separator, which in single-line display may use printed "+"
So that's good to know and it saves us from finding it out ourselves.

xmasradio from Frans Goddijn on Vimeo.