- januari 20, 2015
At the end of the previous blog about the pressostat and PID working together, I mentioned that I would like to clean up the xmas tree of wires and have as few cables and probes as possible to visually disturb the classic design of the La Pavoni.

Getting rid of the probe that was fastened with copper tape to the top of the brew group was a priority. I wanted to hide a new probe in the cooling fin as close as possible to the brew group.

This morning I asked Tije if he could do that. He would need to drill a straight hole of 3mm diameter in the 4mm inner ring of the cooling fin that sits as a tight clamp around the brew group.

At home, I first measured the temperature from the probe inside the ring when the probe on top of the group was at the designed 86ºC. That turned out to be 78ºC. Then I removed the top probe and had only the new 'hidden' probe to work with.
From the back of the cooling fin, just one probe cable goes to the controller.
The La Pavoni machine has been expanded and enhanced in stability, but it is not turned into a jukebox with lots of extra lights and dials. Just the little wire going from the back of the cooling ring down to the cable that connects to the external control box.  The La Pavoni could even work with just the internal pressostat but for best extraction stability connecting the controller is a welcome extra feature.

Below, you can see the graph of the group temperature probe as the PXG4 is doing its auto-tune to determine the best settings of the internal P, I and D variables. Switching on the heating element for a full minute, the PID traces the delay and proportion of the results, repeats this once more 10 minutes later and then, after another 15 minutes of calculations, it has decided what's the best strategy to keep the group stable as measured from the new vantage point.

During testing with both probes active, I noticed that changes in the room, like a big window opened wide, or me blowing air past the group, change the group temperature, up to a few degrees and if this is a new situation that lasts longer than a few moments, the PID reacts and compensates. I think this is an advantage over PIDs that merely keep the boiler at a specific temperature, especially for a machine with a relatively small brew group as the La Pavoni. I expect that bigger professional brew groups with their much heavier weight keep themselves stable more easily. 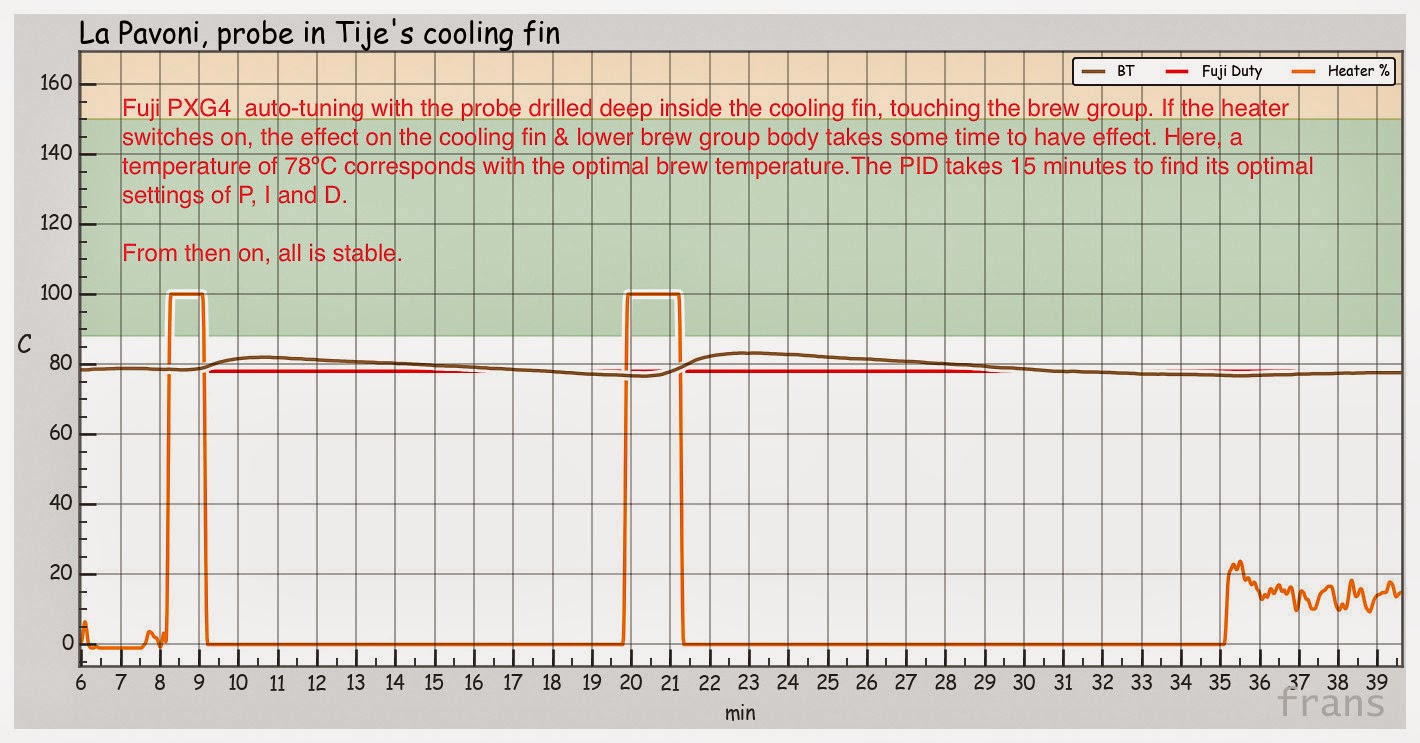 I pulled two espresso's. The brew group probe showed a minor blip of two degrees Celsius and the PID guided it back to idle temperature. 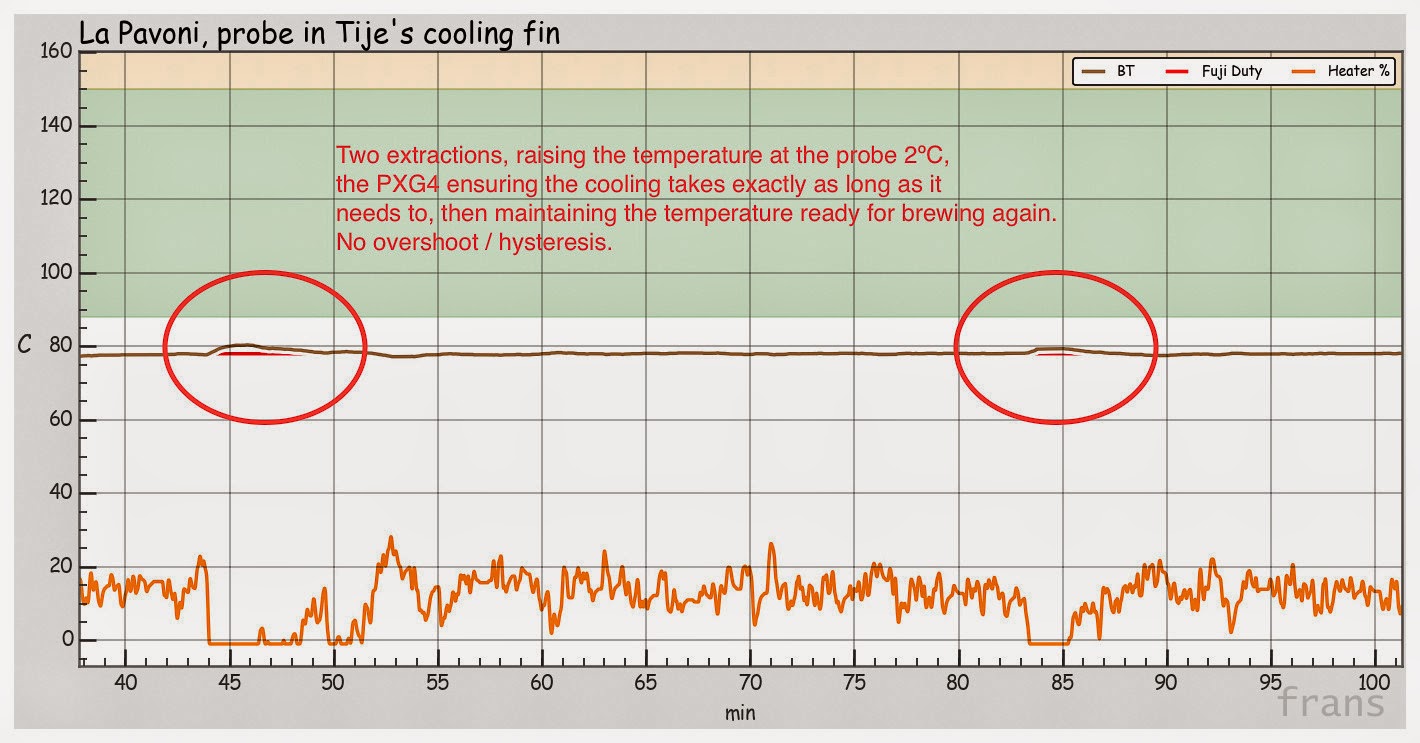 I think this La Pavoni PID & P-stat project is finished.

Thanks Wa'il, Tije, Marko and the Fuji team France for your help and suggestions!!

PS added 12 february 2015: I have changed the wiring in the base of the La Pavoni. Now the main switch at the side of the base activates on the heating element power connection that's regulated by the internal pressostat. If I switch that off and I switch on the external PID, then the PID regulates the power to the heating element. I start off the session by switching on the internal P-stat which heats up the machine and group. The group idles around 80ºC and when I switch over to the PID, it keeps the group at 79ºC (I programmed it to be a little hotter than before, yielding more "body" to the shot.)

Dominick zei…
Would it be possible to purchase one of these heat sinks? I'm experimenting with a way of doing temperature on the Pavoni group head using a liquid cooling mechanism, I would like to try to convert it to a water block.
1 februari 2015 om 11:30

Frans zei…
Yes, absolutely. Most Pavoni owners who ordered the ring use no PID at all and to be honest, when last week I used two Pavonis on a trip in Poland, one with PID and the other with only the pressostat, but both with the ring, they worked practically the same ;-) See one of the pictures on http://kostverlorenvaart.blogspot.nl/2016/04/bachotex2016-day-1.html
6 mei 2016 om 23:51

Frans zei…
Thanks! This was the version that already had wooden handles from the factory. Tije merely used some very fine sandpaper to take some of the high gloss off and show more of the actual wood. You could have wooden handles made by people like http://www.dirossi.nl
3 april 2017 om 08:07