Jan sourced a very cheap blower (€ 11) to start with, Tije developed and constructed the mechanics, Jan built together and programmed the TC4 / SSR electronics.

On his blog, Jan will specify exactly how the TC4 part is combined and programmed and I will copy these details into this blog entry, just as Jan will use this video in his blog.

We did a few test roasts to make sure it works at all and it does. Towards the end, the first roast tended to get a flat BT line and airflow was slightly decreased. 200g seems max load of green beans. Second roast a little more power was given to the heater. Next we will try the Background Roast driven by the PID software of Artisan.

A week later, with updated software that works better to change the fan speed in a stepless way:

Essentially the electronics for this design consist of a heating element, air pump, two relays and a temperature probe. The hardware design is inspired by the Roastuino project. In this project they used a simple heating element (heat gun), glass roast chamber and cheap (€ 12) but effective air pump. For the ‘electronic heart’ we used TC4 Digital Thermometer and Temperature Controller. The advantage of the TC4 is that it’s relatively cheap, programmable and it already has existing firmware to make it work with the Artisan roast software. After sourcing all the hardware, Tije manufactured the remaining parts and he also constructed the prototype. We used a very helpful wiring diagram (use at your own risk) that we found on the TC4 site to connect the electronics.
Firmware for the TC4
Without firmware the TC4 will not do anything. Luckily there are different firmware versions (Artisan Arduino Sketches) for the TC4 available. First we tried the latest available aArtisan that we found on this TC4 site. The code was from 2013 and we somehow did not get it to work properly. On Github we found a more recent version (aArtisanQ_PID_6_0). After compiling the Arduino sketch made by Jim Gallt we got a warning ‘Low memory available, stability problems may occur’. Maybe the code needs to be optimised, but we just hoped it’s would not be a problem.
Second test
Last week, we tested the roaster again. The airflow and heating are nicely balanced. When using 100% power from the heating element, we were able to get 200 grams of coffee in first crack after just 4 minutes and 45 seconds. That means that the machine has lots of power. The prototype was able to communicate with the Artisan roast software. We could log the temperature and set the heating percentage. The AC fan control however didn’t work. This problem was solved by installing the newer firmware .
Logging noise 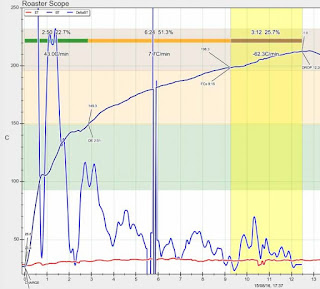 Next steps
More work needs to be done. Priorities are to configure the PID temperature control and to reduce the logging noise. Many thanks to everyone that have made this project possible. To be continued!
List of parts
Below you can see the list of the parts that we have used until now. When you add up all the costs you can see how it somehow got a little more expensive than we had hoped.
Table: List of parts
PS Update on Sept 16, 2016:
Today, Jan updated the Arduino software, also trying out a new Artisan setup that supports a "background roast" using the Artisan PID to follow a pre-designed roast profile. The background is not followed yet so we missed a setting but the PID keeps a fairly stable target temperature. Tije fixed the new safety switch that Jan has brought along. In case of software failure, if you want to switch off the heater and keep the blower active in order to cool the beans and prevent overheating of the element, the switch bypasses the Arduino control board. 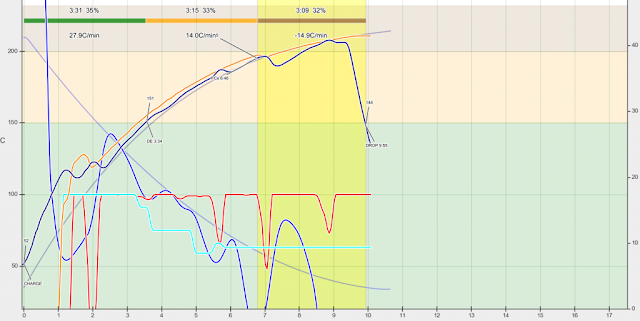 Yesterday we tested the “background roast” feature of the free Artisan software, with Artisan activating and regulating the heater in order to let the BT cruise along the pre-designed profile. Before our test made a few improvements to the hard- and software configuration.

Closing the air leak
Tije sealed the edge of the funnel to fix an air leak. This change boosted the power of the airflow into the bed of beans. Our first impression is that the maximum batch size increased from 200 grams to at least 225-250 grams.

Fighting spikes
In our last test drive we experienced a lot of spikes in the temperature readings. To fix this we installed two ferrite beads that were supposed to suppress the high frequency noise in the circuit. Marko Luther, also gave us suggestions how to get more stable readings. By increasing the filter values in the Artisan Device Assignment tab, we should get better usable readings. Marko indicated that a value from 80 until 90 percent should give us better results. These changes resulted in much more stable readings. 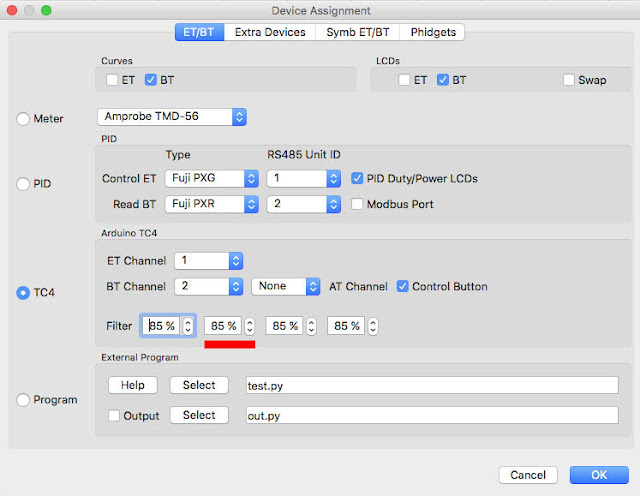 In our previous test we didn’t manage to let Artisan drive the PID drive the roast along the pre defined roast curve. After showing Marko Luther our configuration files, he quickly saw what caused the issue. The PID settings on the Arduino control tab had to be reconfiged. To make it work the source number needed to be changed into “2”. That’s the same as the BT channel number on the Device Assignment tab. Many thanks to Marko Luther for his great help! 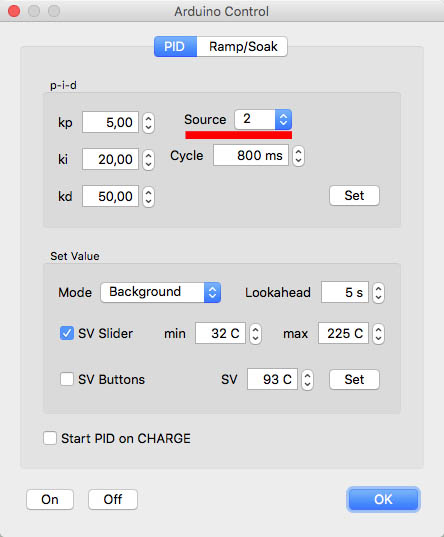 During the preparation of our test we saw chaff flying into the air pump. This chaff decreased the power of the airflow. Frans fixed this problem pragmatically by installing a little strainer on the air pump.

After making all of the changes we were ready for the ‘background roast’ test. The test was quite successful. We managed to get our prototype to roast along the pre defined roast curve. The graph shows that the PID follows the background. But in the image below that the precision can be improved. In graph below you can also see a big dip after the start of the first crack. This might have been caused by airflow changes during the roast. 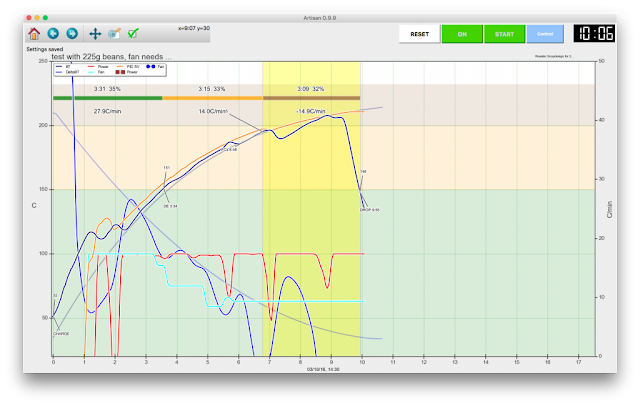 More work needs to be done to optimise the PID configuration. Furthermore we are planning to put a kind of hood on the roasting chamber. This is supposed to improve the efficiency of the heating by restricting the loss of hot air. We are looking forward to do the next test run!

Unknown zei…
Hi! I was on youtube and suddenly stumbled upon your videos about your roaster progress. I must say that it is remarkable! We're from Indonesia and also doing a similar fluid bed coffee roaster project and very excited to wait for your further progress. Wish you all the best!
13 november 2016 om 23:13

Frans zei…
I would first look outside and check if anyone was offering a used Sivetz roaster. Or else scale up to that kind of equipment but one would wander outside the realm of 'tiny cheap' ;-)
6 juli 2017 om 12:20

One quick question, what is the blower that you used in your latest design, that shinny looking one?

Bert zei…
What an inspiring project! We are in total lockdown in South Africa now, but as soon as we can move I will start organising parts. Are there any updates on the design in the mean time?
25 april 2020 om 00:13

After 3 years I'd finally got a functioning roaster, with one painful problem ... bean dropping. I'm scooping it out at the moment ;)

Would you mind sharing how you designed the bean dropping mechanism in your latest roasting chamber, the rectangular one. I'm working with a manufacturer in China (I don't know how to cut/shape stainless steel, nor have the equipment or space to do so) but I have to give them all the specs.

Again, I must say, your project had inspired me to do what I'm doing now. I'm one guy and I don't have all the know-hows but that doesn't stop me.

Frans zei…
Hi Alex, I will forward your inquiry to Tije. If he feels like taking the time to sketch how he built the bean dropping mechanism, I will post it. But it's completely up to him to decide if he wants to share this with a commercial manufacturer for free, of course. Best regards, Frans
16 maart 2021 om 00:44

Frans zei…
PS Tije explains the mechanism was inspired by Alex Campbell's work, as seen on his channel, for instance https://www.youtube.com/watch?v=Eb1DwesJ-x0
16 maart 2021 om 01:05

sugarore zei…
What Arduino device did you use? or which one do you recommend? I'm looking to build a fluid bed roasting but have no idea about the programming side of things...
22 augustus 2022 om 14:26

sugarore zei…
which Arduino product did you use? looking to build a roaster but am new to the programming side of things XD
22 augustus 2022 om 14:27