Complete "Curve controlled" Coffee Roast on the FZ94 with Artisan

The video below may be a little boring for some because I did not cut footage from it to skip any part that may be uneventful. Do slide back and forth at will to see / ignore any part you want.

I started off with designing a background that resembled an earlier roast that turned out promising (roast of 2 august 2016, tasted very good on 11 august but could be somewhat lighter) and this time I decided to not include the steep decline after CHARGE in the drum roaster because the bean temp is not actually declining during those moments. It is the probe temp that is declining while the bean temp which is rising cannot be read yet.

Like last time, the Drum Temp was a bit high at CHARGE so when I started the automatic control of the Fan Speed by the software PID in Artisan, the fan worked hard to lower the BT and I eventually moved the background curve the distance of a minute to the left (later moving it some distance back to the right).

Aim was to end the roast at 175ºC around the 15 minutes mark and that went very well.

I tested a P setting of 30 instead of 20 in the PID variables. I may try a little higher value still.

Towards FC, the PID managed the Fan Speed very well and the BT neatly tracked the designed curve.

Since I had forgotten to do so earlier, in the end I demonstrate how the sliders and buttons can be hidden or made visible and how the buttons can be shown all together or in separate sets.

PS: a few days later, with similar approach but a warmup of the machine to a DT of just over 150ºC. Around the 5-6mins point I moved the background to the right an equivalent of 22 seconds. Fan worked smoothly, with an over/undershoot of just 2ºC after FC.
Next time I will aim for 160ºC Drum Temp at CHARGE. 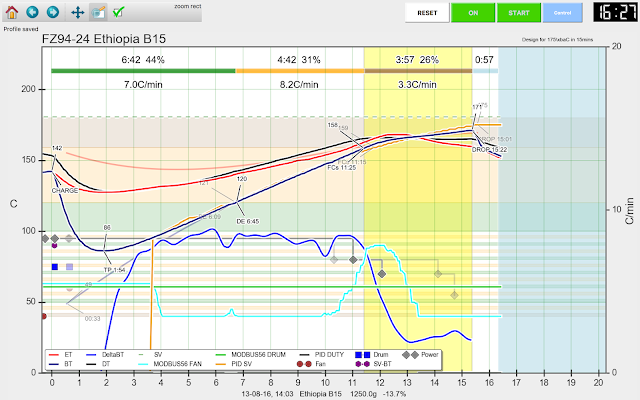