- juni 26, 2015
A year ago I wrote a blog about Jip van Neerven, who was working on a modification of a Kees van der Westen Speedster espresso machine for his graduation project.
Today, having graduated, he presented the machine with his beautiful modification during the big exhibition of all graduated of his year.


The magnificent Speedster is already a fairly silent machine in the standard version with a rotation pump, but now the pressure needed to extract coffee is generated by a simple bicycle pump and no motorized part is active at all, much like in a lever espresso machine.


The Jip-Speedster emulates a lever in more ways than just the pure "silent mode". It also mimics much of the beautiful pressure profile that makes many people love espresso from lever machines.

The bicycle pump is actually used to pressurize two chambers in the tall and slender steel column that's towering over the Speedster. Target pressure is about 10 bar. 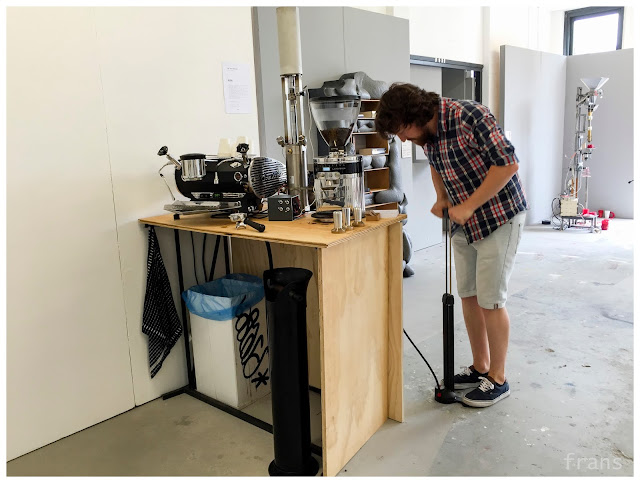 The reason for having two chambers, one big, one smaller, instead of just one pressure source: once a the valve of a chamber is opened and the pressure used to push water of 92.5ºC through the coffee puck, the pressure drops somewhat in the big chamber (say from 10 to 9 bar). If one opens the valve of the smaller chamber, this pressure drop is much more significant.

This helps to get an extraction resembling a lever machine profile: pre-infusion at line pressure, extraction starting at 9 bar, slowly dropping and then, switching to the second chamber, a pressure further declining towards the end of the espresso shot.
Jip invited me to do some more testing soon. Today, he only had a very dark roast on the grinder with beans that glistened from coffee oils, so any subtleties in potential taste would remain hidden. We will next test with some different beans!


In the video, Jip explains how he has mainly focused on the technical aspects, wiring, hydraulics, and has yet to learn about coffee, so he is definitely not posing as a coffee connoisseur and he is not all all pretentious about such things. He enjoys learning and told me he looks forward to my comments later on when we can work together.I think it's a brilliant test bench of hardware and I applaud Kees van der Westen for making all that hardware available for this project. He is not at all afraid that people will damage his brand image and I think that's a very generous standpoint.Kees is abandoning his Idro lever production and I like it that there are others, even with his full and loyal support, to acknowledge the beauty of lever extractions, who like to experiment to emulate this.Jip, meanwhile, is also developing a much smaller machine, La Pavoni size, with such pressure profiling.The Netherlands is breeding espresso innovators, like Jip van Neerven and Wouter Strietman of the ES3, who also enjoyed his internship at Kees van der Westen's workshop, and who even works with KvdW's metal work engineer.