- februari 01, 2013
A reader asked where the temperature probe is currently attached. I made two pictures to show some of it:

On the left is the Ponte Vecchio Lusso 2 and attached to it, using two velcro strips, a needle with K-type probe which is connected to the little grey temperature logger, currently saving the temperature value every 15 seconds to provide me with a graph of warmup, some extractions and cooling down. The Arduino on the right tracks the room temp (actually the chip temp but it is just a few tenths of degrees off the reading by the tiny Tempe button from Garmin (third thing from the right on the front of the table). The Arduino also tracks the boiler temperature, using a probe which is attached by a tiewrap to the top of the boiler. The grey-orange laser gun measures the extraction as it flows from the naked portafilter. The FLUKE temperature measuring device is not in use here, the little analog and digital devices on the right are also not used.

Some first impressions: boiler is stable at 125º C, group at 65º-70º depending on (in-)activity, extraction temp at exit of filter basket is around 65º C, when the flow is at maximum it touches 70º C. 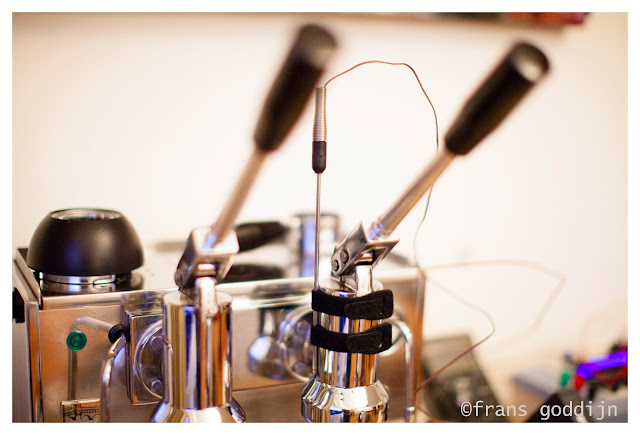 On top of the Lusso, to the left: water reservoir of the Mypressi Twist, which is there ready to go at a stable 45º C.