The friend who got it planned to figure out what can be done with it but was busy at the time (he still is) and the device gradually moved further into the background. A few years back the box that it landed in was moved along with lots of other stuff to his new house and today, as he was clearing up space he rediscovered it and sent me a picture of it in an app asking this came from me. 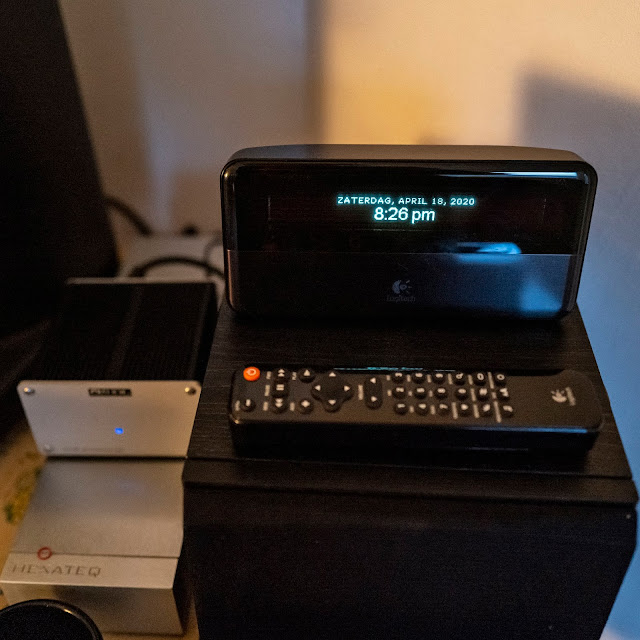 He gave it back to me and I was keen to see if the thing would still work. It remembered its name, had to be told what WiFi I am on now and it remembered what music it last played.

I downloaded the Logitech Media Server which was still online (!) and even that still worked.

I'm especially fond of the dedicated 5V power supply that I purchased for it so long ago, the VDC-SB hand made by Channel Islands Audio. Tiny, modest, in the simple and neat body design of their high end products.

Hans Beekhuyzen wrote a (Dutch) review of it at the time and it's still online:
http://thehbproject.com/nl/testen/68/Channel-Islands-Audio-VDC-SB-voeding-voor-de-Squeezebox

In an review on Darko Audio, Dusty Vawter of Channel Islands Audio explains:

When I first heard about the Squeezebox, I thought it was worth checking out so I ordered one to try out. Once getting it up and running I was surprised by its performance and ease of use. The following day I turned on my old Accuphase tuner and noticed that it produced nothing but noise. I suspected the SB3’s stock switching supply was creating RF noise, so I unplugged it from the wall and sure enough, my tuner was once again noise free and sounding great.”, begins Vawter.

“The next step was to make a linear supply (no RF noise) to fix the problem. The first prototype did the trick and also improved the overall sound on both the analog and digital outputs.”

“So then we went to work experimenting with transformers, filtering, regulation circuits, and layout, to create an efficient and cost effective design which produced a rock-steady output voltage with very low noise and ripple. The result was a nice plug-n-play upgrade for the SB3 (and now the Touch).

I currently use the Squeezebox as a little clock and I'm happy it's alive.

Unknown zei…
Darko loves that thing indeed. I got a weeks back my first linear psu, for my little topping dac. Very happy with it, and the tweaking is fun and rewarding with good music listening times.
23 december 2020 om 20:50