op augustus 19, 2016
Roasting a new stock of beans on a new roaster is exciting because one needs to get 'the feel' for the machine and at the same time find out what could be the best performing roast profile for the bean, not just for oneself but also for fellow baristas.

Beans
I picked up 22.5kg's of Ethiopian Yirgacheffe  beans harvested 2015/2016 at 1600m above sea level on Nefas Farm in the Oromia region, 500km from Addis Ababa. The berries were hand picked, washed at a local station, fermented up to 48 hours and dried for 9 to 15 days on elevated drying beds.

On arrival from Giraffe I measured a moisture value of 9.5%, using the Wile Coffee an Cocoa moisture meter.

Taste over time
Since I do not do any cupping, my roast evaluation method takes more time. I let the beans rest for about a week, preferably longer and then taste the espresso over a few days time. At home I use a Compak E8 grinder with the redspeed burrs, and also a Compak R120.

If I use the latter grinder I am single dosing, make sure to first throw a handful of beans through the grinder that I won't use, followed by a single dose, trying the extraction, changing the grind, again first flushing a handful et cetera until I get the best shot I can make. The R120 gives an excellently truthful result, revealing precisely the horrid or the beautiful, whatever was in the bean to extract.

Mostly I use the E8 though, with a well filled hopper to have a consistent downward pressure on the beans towards the burrs.

Fellow Baristas
I also send out batches of beans to fellow home baristas, guys who are each very dedicated to their coffee making. One, Bob, uses a Tidaka grinder and a Bezzera Strega machine, the other, Erik, extracts on a Strietman CT-1 matched with a Eureka Olympus grinder fitted with TiN Mythos burrs. I also took batches to Erik and Edward from Trakteren Cafe here in Amsterdam (Edward won the silver award at the recent Dublin world championship for Aeropress) and one batch went to Bert van Wassenhove and his colleague at Caffenation, also in Amsterdam. All their feedback helps enormously to find out how the beans perform on a spectrum of different machines than my own Londinium L1-P lever machine.

First I will show you the best looking roast profile, roasted today but modelled after the profiles that so far scored best:

Roast procedure
I warmed up the machine until Drum Temp hit 150ºC, then started the roast. In Artisan, the preprogrammed alarms ensured the correct drum speed, airflow and max DT was set and along the roast, voice alerts prompted for events like checking bean color around 120ºC, and the optional hints for switching off the heating elements. At minute 6, as the actual Bean Temp (BT) closely approached the designed background profile, I switched on the internal software PID of Artisan which then took over control of the airspeed to force the BT to coast exactly along the designed curve.

The Rate of Rise (blue line) gradually declined, with a brief tendency to move up near the onset of FC, then sloping gently down until the End of Roast.

I switched off (grey dots) the first of three elements around 11:15, the second around 12:20, briefly switching it back on around 12:50 and then switched off the last element around 14:30. The airflow, managed by the Artisan software PID, made sure that BT did not overshoot nor lag behind.

Average Rate of Rise for the three stages was 8.1ºC/min, 7.8ºC/min and finally 3.6ºC/minute. Development time was 25% of the total roast at nearly 4 minutes and beans were cooled down in just over a minute.

How did I arrive at this profile design?

Below I share 8 profiles of the previous 16 roasts. I printed the profiles, adding handwritten notes to these when I (or others) tasted the results.

Batch 2 seemed too fast and not hot enough. Extraction was fast even when ground finer. It seemed pretty at first but really did not develop well over the days. Chucked it. Friends use it in their garden to scare away the cats.

Batch 3 was just as light, but roasted a minute longer. Faster drum speed after FC helped to get rid of chaff but really in a good, active development, the chaff must fly off voluntarily with volatility and voila. In the following days, it remained somewhat dry in mouthfeel after the first sensation that seemed reasonable. Nothing special. The green beans deserve much better!


Batch 4 roasted to 175ºC in 15 minutes. On other roasters this would read about 40ºC higher, as FC sets in around 160ºC and one knows the beans will be around 200ºC then. This is not an issue, just something to keep in mind when trying to "translate" profiles between roasters. It worked well om the La Marzocco Linea Mini which Jan van der Weel and I were reviewing for KTC magazine that week, mild and beautiful on the Londinium and it even did well on my neighbor's superautomatic with built in grinder. Still, not standing out with much that would suggest the terroir.

Batch 7 was faster again but still ending at a comparable 175ºC . It worked very well on the Strega at Bobs place and Erik found this one the best of the batches so far on his Strietman. A friend with a Tonino color meter came by and tested it at Tonino 107, on the light side for espresso.

Batch 8 was roasted longer and lighter. A pleasant espresso, soft/woolly with something fruity at Bobs place, I found it somewhat spicy and just a hint of acidity but an earthy aftertaste. Certainly not as good as Batch 7.
PS on 2 September Erik writes me that B8, after 5 weeks, is pungent, unpleasant. So the lower end temp  makes this a very bad bean.

A very long roast, nearly 18 minutes, having fumbled with the new PID feature.  Four days after roast it seemed fine, but Bob found it way too dark for Ethiopia and I agreed. Still, almost two weeks after roast in was a beautiful espresso, complex without an unpleasant aftertaste.  I was "in the ball park" but would like to bring about something better.

Batch 11: same 176ºC end temp in a much shorter time, nearly 15 minutes with the PID actively managing the BT all along the roast. The result first had a dry aftertaste, not very expressive but the next day, grinding finer and extracting 21g of espresso from 18g in the basket with a 12s preinfusion it gave me several delicious shots in a row. Getting close?

PS on 28 August, almost 4 weeks after roast, Erik (Strietman machine) writes me that he "finally came around to tasting this one. Very good for a slightly darker roast, full bodied and creamy with the typical Ethiopian taste, albeit a little dry in aftertaste."

Checking again if a faster, lighter roast would get me more of the 'Ethiopian' elements, the brightness and fruitiness without the dry aftertaste. Treated my neighbour and his colleagues at the bicycle store with 3 espressos they liked. Using the R120 grinding a little bit finer than usual, 19g of grinds yielded 30g of espresso in 27 seconds which tasted very nice, light bright and spicy but still had this dry mouthfeel that I don't get when I roast up to 175ºC in 15 minutes. I took most of the rest of this batch to Bert of Caffenation where he and his colleague will give me feedback soon.

Then (skipping a few batches) I did the roast that's at the top of this page. A copy / combi of the best profiles so far which also happened to work very well with the Artisan setup and PID driving the roaster.

I will add my findings in a week or so!

PS 27 august 2016
Batch 17 does very well here. I first tried it on the set that I brought along for a short vacation near Rockanje in Zuid-Holland and after my return home last night I could hardly wait to try it on the Londinium. 18.6g in the basket, 33g out in 41s after a 10s pre-infusion (5s of 2 bar, 5s of 3 bar). The espresso is bright, very Ethiopian and sweet, without leaning towards a dry after-taste and also not tasting too dark while still having a creamy mouthfeel and, when swirling the coffee in the wide cup, the syrupy coffee fluid momentarily hangs on to the side of the cupping bowl before slowly flowing back into the rest of the espresso.

So I'll stick to this profile for the remaining few batches and start with that when I go searching for the best roast of the next bean ahead, from Guatemala! 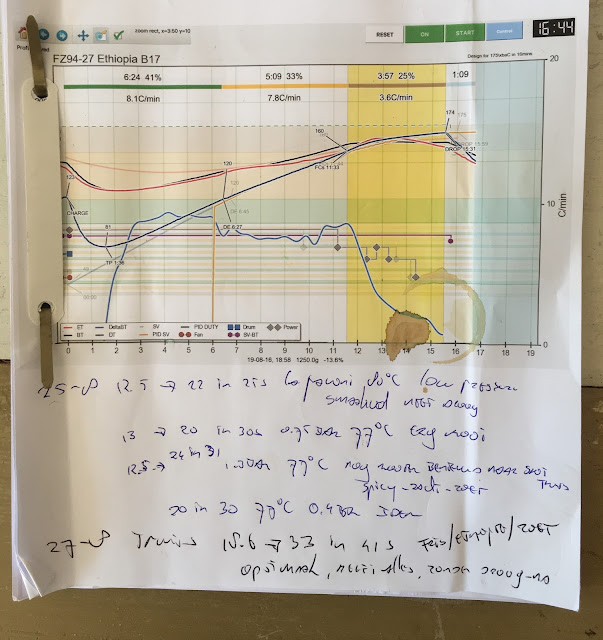 illustration by Matthias Gerstgrasser On the mailing list for Artisan users , Matthias Gerstgrasser posted a report about his coffee roaster project, with a link to a beautifully illustrated, complete step by step guide of his work on Instructables: A while ago I posted a few messages on here regarding automation for my hot-air popcorn roaster, and was asked if I could share a writeup of what I had been doing with my setup. I know it’s been a long time, but I haven’t forgotten, just got a little sidetracked (more on that below). I have finally found time to do this over the last few weeks though, and compiled a step-by-step guide of how I modified my popcorn machine. This is now available on Instructables: https://www.instructables.com/id/Arduino-controlled-DIY-Coffee-Roaster/   Do let me know if there’s anything missing or anything that could be improved. I intend to keep updating the guide as I find ways to improve it or as new developments occur. I am also discussing b