Roastmasters working with a PID like the Fuji PXG4 could in the past already enjoy the "autopilot" feature of Artisan, making sure the roast profile neatly coasted along the curve saved from a previous roast.

Now, Artisan has its own internal software PID and if you can link it to a device that influences your Bean Temperature (BT), you could use this option to automatically correct the live roast curve to develop along the curve you have as your current ideal.

First, you need to have a realistic roast curve that yields a promising roast or a roast that you have actually tested while cupping or making an espresso.

In many devices, a PID switches a heater on/off to get the desired result. If the unit is not hot enough, the PID switches the element on and if the unit tends to overheat, it switches off the heating element, often in tiny pulses so small adjustments can be made. In those cases ON means HEAT.

Here, the software PID in Artisan is used the other way around. If the beans tend to get too hot, the airflow is increased and if the BT is about to get below the target values, airflow is decreased so the heat produced by the elements is allowed to be around the beans more. So in this case ON means COOL.

This negative rather than positive task for the PID is not entirely unusual though. For instance, inside a tamper machine for chocolate production, a light bulb is used to heat the mass and a fan is used to cool it. The control works in dual mode, adjusting both fan and lamp to keep the temperature stable.

I wanted to couple the PID to the device controlling the air flow. During a normal roast in the FZ-94, more airflow causes heat to leave the machine with in consequence a lower Rate of Rise (RoR) and less airflow causes the machine to retain the heat radiated by the three elements longer which in effect gives a higher RoR.

Since 60% of airflow capacity seemed to me to be a reasonable flow, a little on the high side, I set it to that value for my first test run, developing a roast profile that should be able to reproduce if the PID could vary the fan speed well above and below that 60% capacity.

This was the result:

This went very well. I loaded 1250g of Ethiopian beans and I needed to do very very little. Just shutting down one element at 155ºC, the second at 170ºC and the last one just shortly before DROP of the beans and cooling them. The blue RoR line shows a neatly descending trend. I had expected the roast to last 15 minutes but this was fine as well.

I pre-heated the machine until Drum Temp (DT) was 150 and I planned to repeat the same today, then handing over control to the PID in Artisan.

Today, I got a phone call just before DT was 150 so it all got a little more hot. No problem because 1) I have a margin to play with due to airflow and 2) I can move the background profile to the left to "catch up" and pick up BT where it actually is and let the PID handle it from there.

Here is a screen snapshot of the beginning minutes of this PID driven roast:

It was great fun to see some sliders move automatically in the Artisan screen. The FAN slider went all the way up as soon as I fired up the PID because at the time, BT was much higher than the target BT (the grey background line of the previous roast and the orange PID SV line over it).

I temporarily closed the Sliders side-panel by typing S on the keyboard, then moved the background / target profile to the left with the left cursor key (can also be done using the drop down menu you get from Roast - Background) until the target BT touched the actual BT as you can see on 2.5 minutes into the roast.

From that moment on, the PID kept regulating the airflow automatically and I could see the FAN slider move up and down in small steps, just like you can see the light blue graph going up and down actively, with the effect that the beans were guided quite precisely along the target line and even the RoR was fairly close to the previous roast (dark blue line). On the FZ-94, the moving up/down of the FAN speed slider neatly matched with the numbers on the Fan frequency drive controller rolling up and down like on a busy score board.

The two dips in this RoR always occur, at practically the same moments (in the background on 5mins and 9mins) without there being a visible connection to any event. We might figure out what that signifies later on.

The right SV slider also moved up along the target value in the background.

Below is the total graph of this roast: 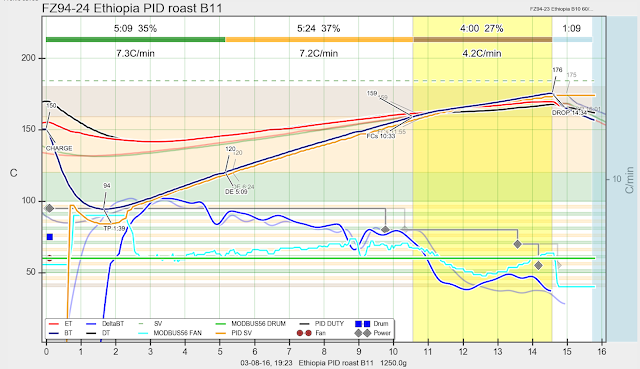 You can see how the airflow gradually goes up until I switch off the first element at around 9:45. Then the average airflow is kept lower by the PID to make sure BT is not falling below target values. I switch off the second element a bit late maybe, as you can see how airflow is cranked up to prevent BT from getting too high and then RoR slopes down again. I decided to end the roast when I saw BT=176.

Next, I can use the Designer feature (Tools - Designer) to tweak the profile a bit more, maybe shortening the total roast time a tiny bit and having a target of 175ºC.

All in all I had not expected this to be so easy.

If I do this more and get a routine, it will be much easier for others to copy a roast profile and make sure the FZ-94 behaves exactly the same. This will maybe take away a bit of the secrecy and presumed magic of fine coffee roasting but I'm very happy that it is possible! It will help roastmasters educate other staff to replace them on routine work.