- april 30, 2015
One of the frequent participants of international TeX conferences is Alan Braslau, an American researcher in physics. The first time I met him, he presented a project he had worked on, mapping and analyzing patterns of usage of electric energy by households in France, most of the energy coming from nuclear plants.
One detail that stuck with me was that he predicted years ago how old fashioned light bulbs would be banned in favor of "environmental friendly" lamps to save energy. He explained that old fashioned lamps "lose" energy by giving off heat but for most households in moderate European climates this is useful because when the lights are on, it's usually dark and cool outside. Today, the warmth that the cheap old light bulbs used to give us has to be generated by heaters so part of the energy saved by the expensive high tech lamps is indeed not really 'saved' but just lost in a different way.

During his first presentation he also told us about something he has been working on whenever he found enough time and funding. Very close to the temperature of zero Kelvin, when everything is frozen, the helium we know as a very light gas has gone from fluid state into a beautiful crystaline form. Very few people have seen this as it is hard to create this extreme "hell freezes over" cold inside a container with helium. You can't look at it very well either because any light shining on the crystal also raises the temperature, if only fractionally.

There is one puzzling aspect of this solid state of helium. The sides of a crystal are usually hard because of the very regular build. The molecules are lined up perfectly and the outside of the crystal is stiff, the edges sharp. This ultra cooled helium however can behave like a fluid even though it is in a crystal state. If you bump it, this sends a shiver over the helium skin and a ripple flows through the surface.

I met Alan again at breakfast today. Last year when I asked him about any progress in Helium observation he told me that no research had been possible at all and the idea seemed something of the past that he did not enjoy to be reminded of, just as one does not like to be asked about a lover who has moved out years ago.

Still I asked him once more and now I hit a gold strain: he is presently in a team studying turbulence in Helium at 2 degrees above the absolute zero Kelvin temperature. Knowing more about the very dynamic turbulence in the fluid will help understanding many other processes of similar energy dissipation. This is a schematic version of the vessel used for the study: 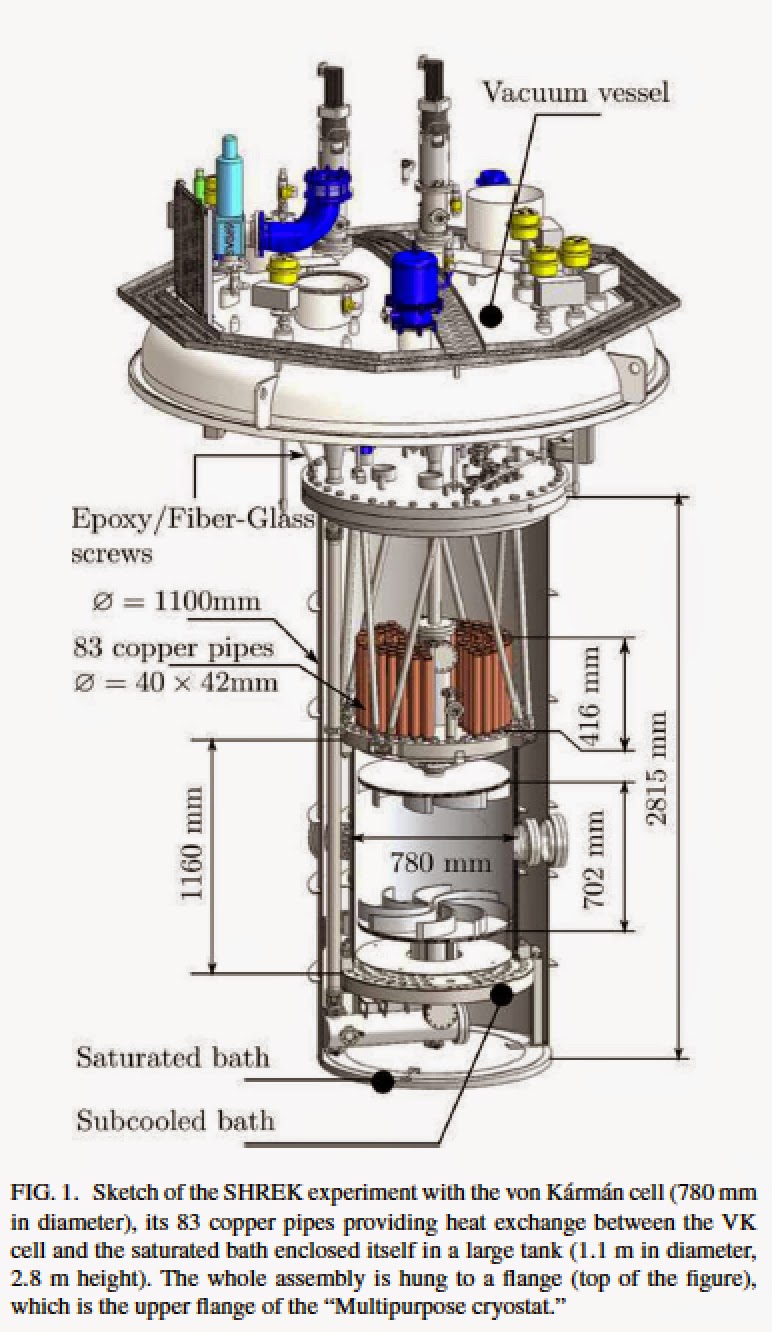 It's hard to "look" at the fluid Helium though because it's in a closed tank and pioneer work is being done to find out what's the most effective way to get a 'picture' of the inside events. Putting up the tiniest of pitot tubes is one method, also looking into the fluid with a high speed camera. For the camera to see the turbulence, minuscule 'snow flakes' are created, mixing deuterium with hydrogen in the right density (enough snow flakes to see some action, not so many as to occlude the view). 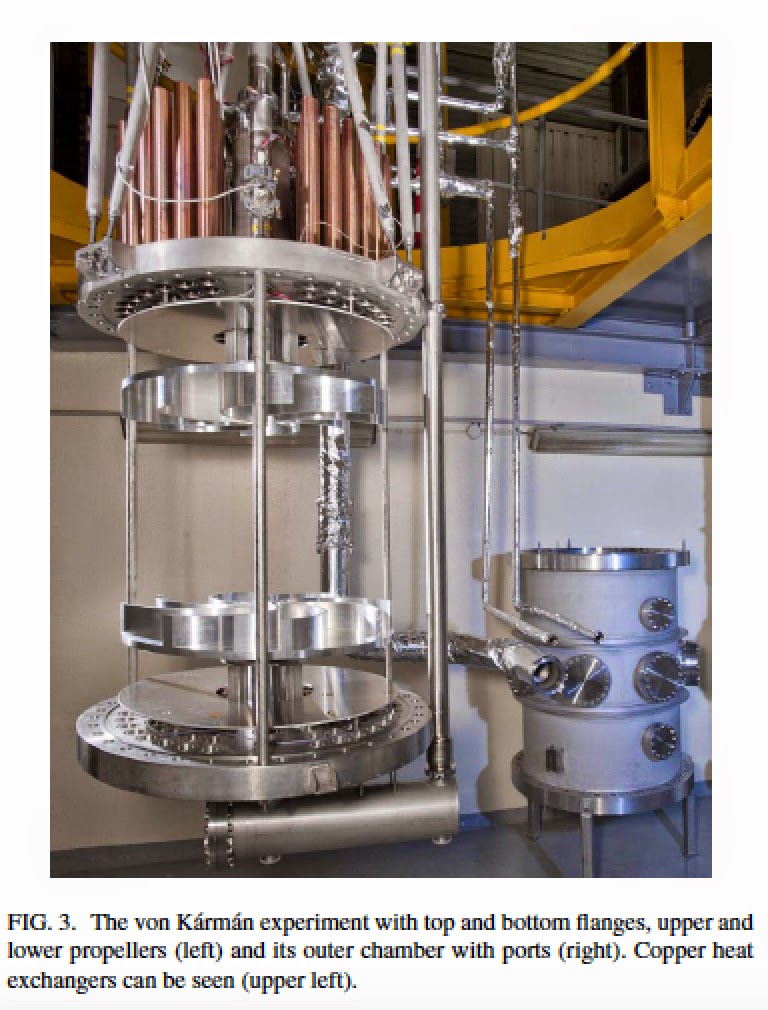 Below is a picture of the experimental setup in the research lab. Notice how small the scientists are in comparison: 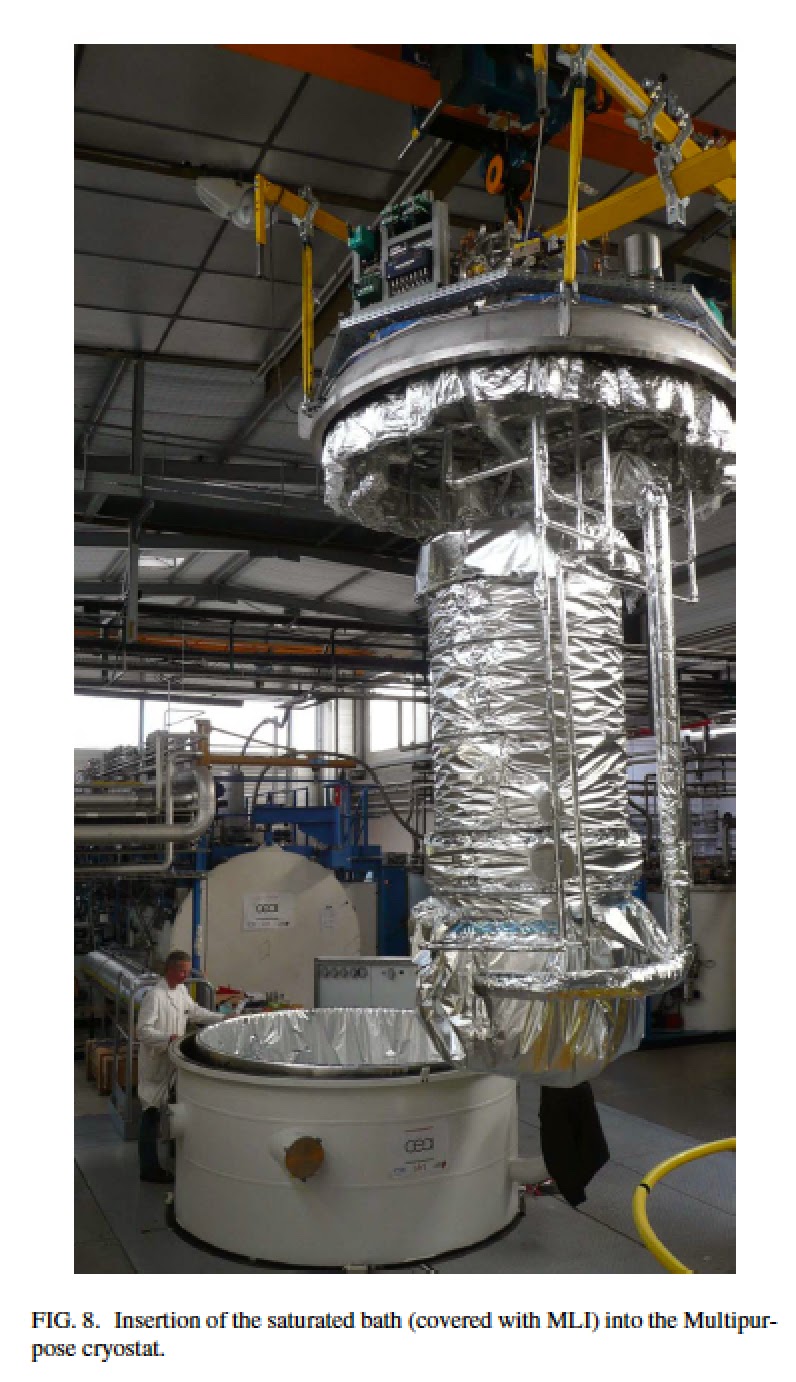 This story reminded me of Niels Tieland, a friend on the soaring airfield who years ago studied fluid turbulence to be able to predict where thermals are developing in the air. Often you can tell where you need to fly to catch a thermal by looking at the clouds but in a blue sky you're helpless unless you have learned to find these thermals anyway. Stirring with a stick in a massive pot of oil, Niels has spent many hours watching the swirl of the oil and the effect it has on the fluid further away from it. Niels amazed me by 'blindly' telling me where to turn and hit a thermal. Time and time again, he would tell me things like "turn to our three o'clock and we will be in the next thermal at 5, 4, 3, 2, 1 and..." sure enough, the audio signal indicating a sudden upwards thrust of energy would sound and we'd be swirling upwards along with the circular airflow into the blue sky.

Today, Willi Egger gave a presentation about his internship with a violin maker in Poznan.

Originaly, Willi was a veterinary doctor in Switzerland before moving to The Netherlands and working as a consultant for the pharmaceutical industry, advising farmers in Asia. Later he moved on to carpentry, he learned to be a master book binder and he became proficient at digital typesetting of books. Building a violin requires the ultimate practice of a combination of fine carpentry techniques -- if you can accomplish that, there are many ways to go.

Willi told us many details of the traditional process of building his first violin. He has worked on it for three months and it will take another couple of months before it is ready but a large part of the body work has been done. His teacher does not speak much English and Willi knows just a few words of Polish but in a way this is a great advantage. Few words are wasted and all is taught in detail by watching and doing, stopping, watching the corrections and doing again.

The front and back blades are practically ready. To test a blade and find out if on any spot the blade needs a minute amount to be carefully scraped off using a piece of sharp glass, a master violin maker holds the blade in his hands and flexes it a little, again and again, sensing the tiniest stiffness to know where on the wood to scrape and test again. For more than four decades the master has trained to feel where the sound of the instrument will encounter resistence and to remove it.

Willi, at 60, does not have the time to train that long so he uses a more modern technique that makes the audible visible.

A tone generator and amplifier are connected to a speaker and a tone of a specific wave length is sent through the blade. On top of the blade, dry tea leaves are sprinkled and when the blade trembles, the leaves move away to the parts where the wood is still. This way, any stiffness in the wrong spots is indicated and any irregularity in the sound pattern will show.

I find the "moustache" of tea leaves highly artistic, revealing the finesse of wood work and I admire the craftsmen who take very good care with whatever they do, because nothing can be undone.

And in a way, the violin maker is finding his way blindfolded just like the scientist feeling for patterns in helium vortexes and the soaring pilot sensing his thermal swirls.