- februari 18, 2014
The Tonino arrived. It's a new tool for coffee roasters to measure the color & darkness of their roast. Previously, such devices were very expensive (3000--15000 Euros) and only industrial roasters could afford to have them around. Roasters who couldn't afford the real thing, could settle for tiles in several colors representing values on the standard scale, so they could compare their beans during or after a roast to see how far they were off from their target coloring.

We are not schooled in cupping so if we want to know how our roast profile has done as soon as possible after a roast, Tonino is a very powerful tool. It gives exact numbers from a calibrated device.

The color example below is an alternative, but one never knows on what screen the designer made this chart, how it was calibrated, where he scanned the original color tiles from, on what medium, so it all remains guesswork and nothing to be communicated in a very meaningful way.

Measuring roast color of ground coffee beans tells you more than just measuring the outside, because like a slab of beef can be roasted dark on the outside while being red inside, beans can be more deeply roasted or more superficially colored than you would guess on first sight.

Now, two guys in Germany have produced a small series of a roast color analyzer that is at least as exact at a fraction of the cost. Plus, their best customers donate 10% of the price to CoffeeKids, an initiative to help children in coffee producing countries. See their web site: my-tonino.com

I have unpacked the Tonino, calibrated it (very simple) and used it to compare two very different roasts. One light espresso roast of an Ethiopian coffee roasted on our modified Roastilino and one handful that a friend gave me which has come of his Gene roaster so dark it was almost charred.


The drawing on the outside of the Tonino was made by Sindy & José, two children from Guatemala supported by CoffeeKids at the Las Nubes Afterschool and Learning Center ADESPA

Now, on to the Very Dark Beans. They are actually darker than you see on the picture below, gloomy dark, oozing oil. Beans from Hell, sticky and smelling sharply like goat dung.

This Tonino will allow us to evaluate a roast quickly after the roast is done, without having to wait several days for the beans to rest and breathe. Will be interesting to learn more!

Using the app, I have loaded an Agtron Commercial scale into the Tonino device, so I can approximate measurements as if they were made on the device of the very expensive market leader:

Other scales are those emulating Neotec ColorTest, Probat Colorette, Agtron Gourmet and ColorTest. The values then approximate those standard scales but in a lab / industrial application it would be best to also take a few samples on both devices to enable the Tonino to get finetuned. For us, it seems enough to be able to communicate values that are meaningful to people familiar with Agtron readings or Agtron tiles, while within our own little roastery we will be consistent as long as we keep the Tonino tuned to this current scale.

Using the Agtron scale enables us also to use other pages as a reference, such as

Where we find this helpful chart. These charts are of course drawn up for people who could only wish to have a device showing Agtron compatible readings. They would use it to get an estimate of what an Agtron reading would be, we can see where our roasted beans reside in the roast spectrum on the lists and this knowledge, combined with tasting later, can help us refine the roast profiles or detect where we went astray. 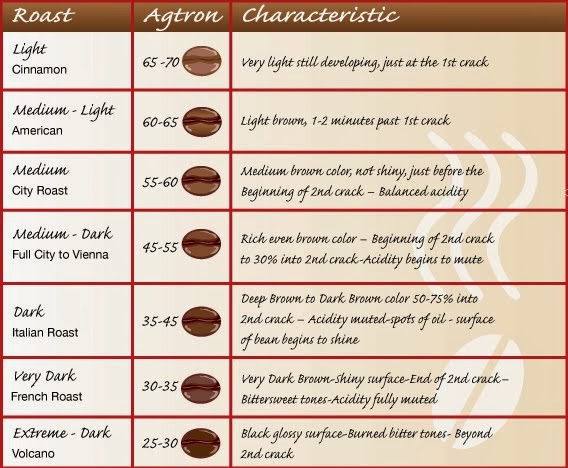 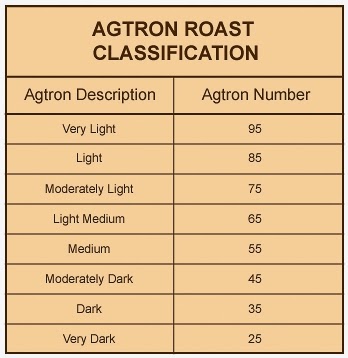 Another useful chart from http://www.coffeelabequipment.com/Color_Selector_cl.pdf : 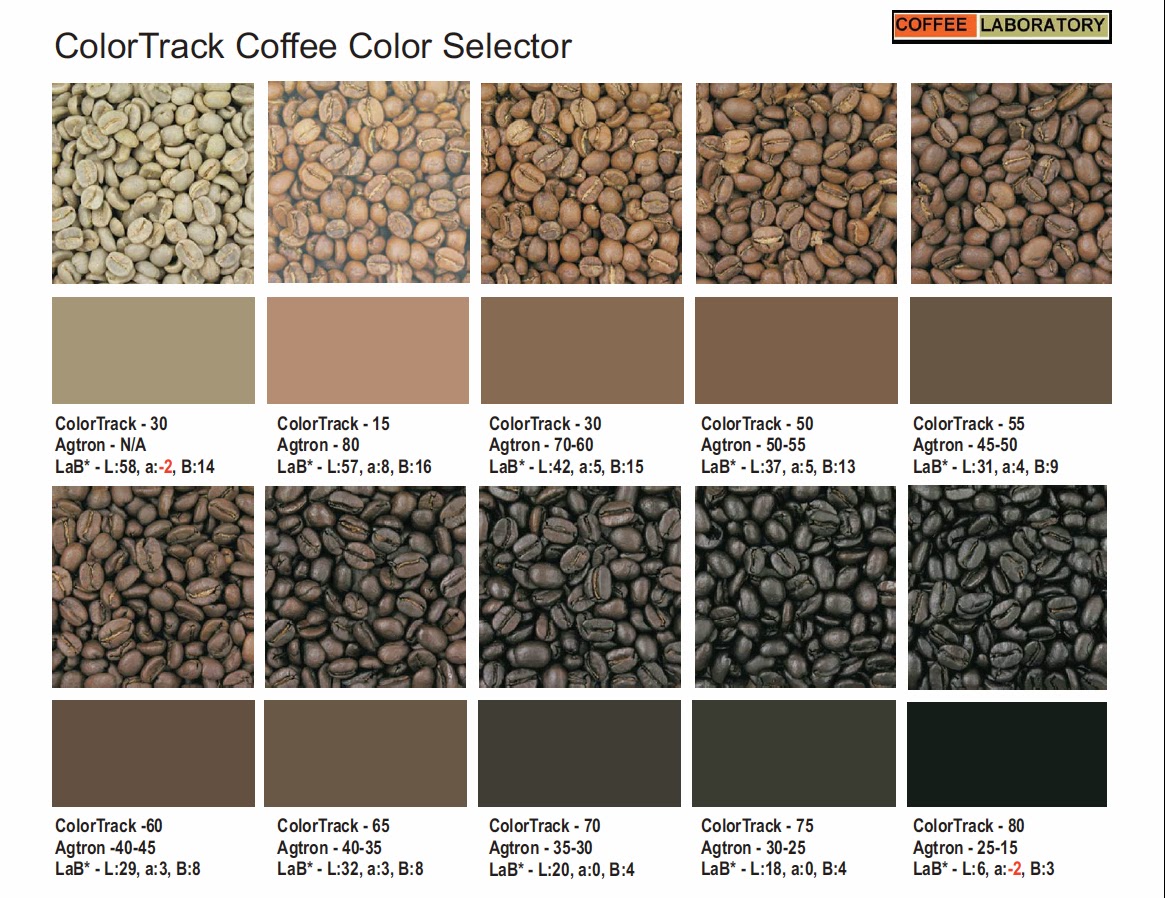