Alarms to actively help with your roasting

- augustus 14, 2016
During the roast described in the previous blog entry I noticed that the beans heated up slower than I expected and as I was also chatting with a visitor, it took me a while to realise I had the drum turning at the slow "warming up" speed and also that I had not yet set the SV-BT slider to the proper maximum value.

This was swiftly corrected without anyone noticing my glitch but afterwards I decided to make use of the "Alarms" feature in Artisan to automate a number of routine actions and alerts.
(Also see the "More Alarms" blog entry on the Artisan blog)

Below is a short video demonstrating what happens now after I click Start:

After I click Start, Artisan makes sure that my Coffee-Tech FZ-94 roaster has the correct drum speed and airflow and also it sets the PID of the Drum Temp to the correct maximum (SV-BT) value.

The values of the sliders on the left of the Artisan screen automatically move to the intended figures. Drum speed 60 means that the drum will rotate with about 60 rotations per minute. In my setup, a Fan slider value of 20 corresponds with 45% of the airflow capacity and a SV-BT slider value of 95% corresponds with a maximum target value of the Drum Temperature of just over 180ºC.

A computer system voice announces these values so I am reminded to check if these are indeed effectively set.

From then onwards, the voice also reminds me to check bean color around the expected Dry End point, it alerts me to listen for First Crack around a Bean Temp of 159ºC and it announces suggestions for moments to switch off the heating elements. After a few roasts of the same batch of beans, these values can be edited to reflect what has actually happened in color development, First Crack and also depending on the observed effort the PID made to drive the Fan Speed in order to cruise along the planned profile.

After the beans have been dropped, Artisan remembers to set the SV-BT back to the value that I need to warm up the machine next time I will do roast. Also, a reminder is given 50 seconds after DROP to stop cooling the beans.

Below is a roast profile of a roast I did using this new set of Alarms in Artisan: 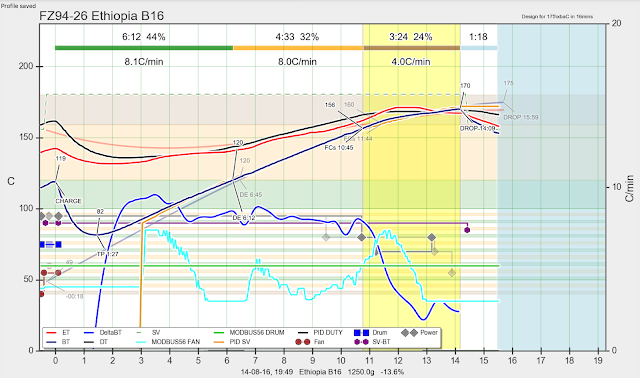 Around minute 3, the Bean Temp joined the planned temperature profile and the PID of Artisan nicely activated the fan speed to make sure BT cruised along the designed profile. Manually, I switched off elements when I noticed the fan worked very hard and I briefly switched one element on around minute 13 to help sustain the Rate of Rise a little. I aimed for a lighter roast so I stopped at 24% development time.

Marko Luther has published several blogs about the many possibilities of the Alarms: