If your tank fed Londinium is beeping, it probably thinks the water in the tank/reservoir is low. (It also beeps if filling the boiler takes rather long. In that case switching off and on sorts that.)
Possibly the water filter took out too much minerals so the water is not conductive to electricity. In that case add unfiltered water.
Also possible: the tiny metal nipple inside the bottom of the reservoir has been pushed up a little and is not connecting to its contact below it. Push the metal 'nipples' back down to be flush with the plastic and you should be good. 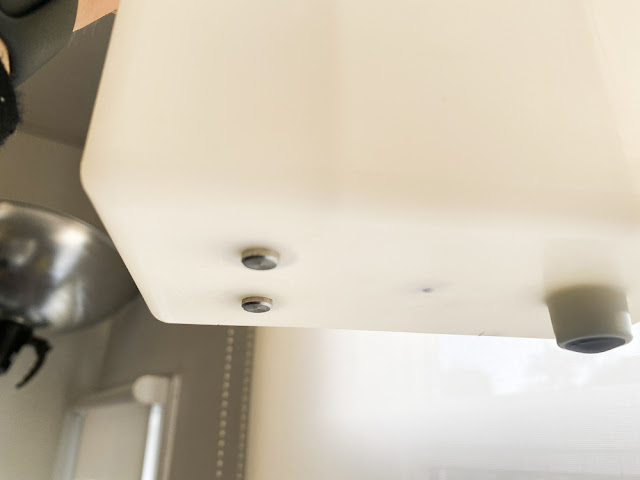 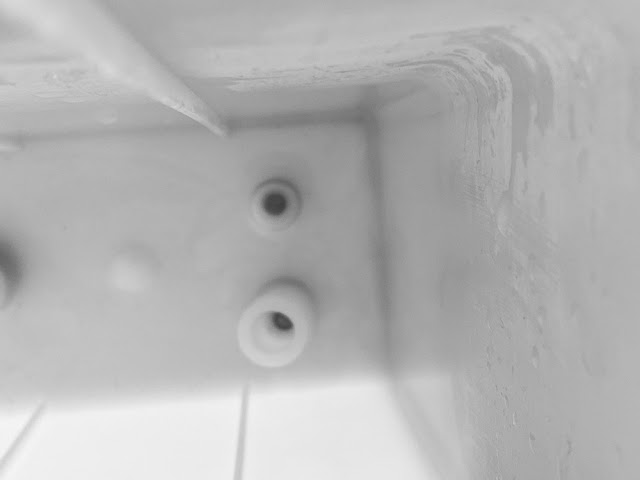 Posted by Frans at 00:52 Geen opmerkingen:

(on the Londinium forum, a fellow owner asks where the NRV -- Non Return Valve is located. I am temporarily unable to post pictures in that thread so I post them here and provide a link on the forum;)

Posted by Frans at 11:01 Geen opmerkingen:

Posted by Frans at 23:52 Geen opmerkingen:

Tweaked the English commands for the French voice a little bit:

Posted by Frans at 11:17 Geen opmerkingen:

My roasting neighbour John gave me 1.555g of green coffee beans from Costa Rica. The clip below is about roasting these beans on the Coffee-Tech FZ94 roaster, using Artisan software. The voice used is French, hence the title "French roast".

First a picture of the result in the cup, a delicious spicy shot: 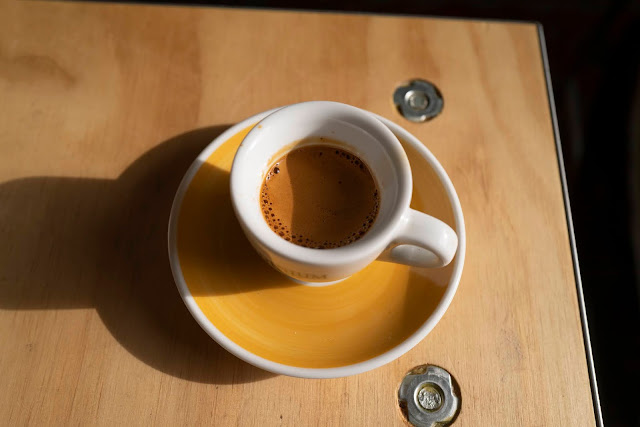 For perspective of the ranges that I specified in  the first video above, here are Artisan's data of a few recent roasts of different beans: 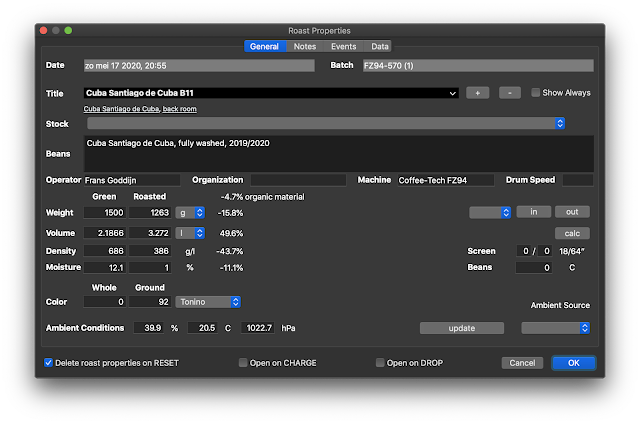 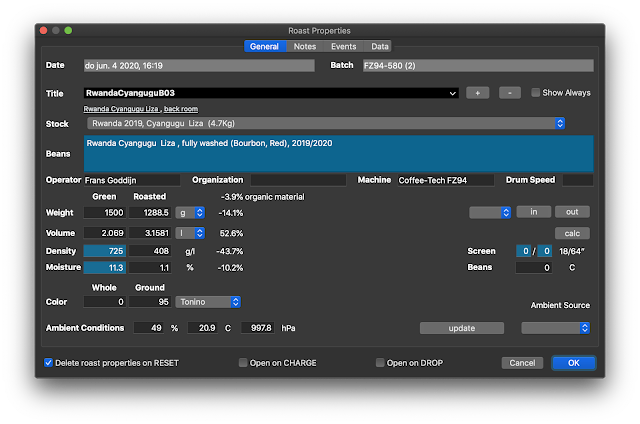 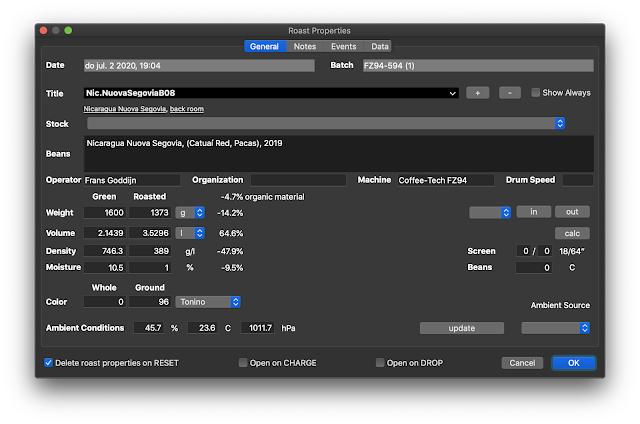 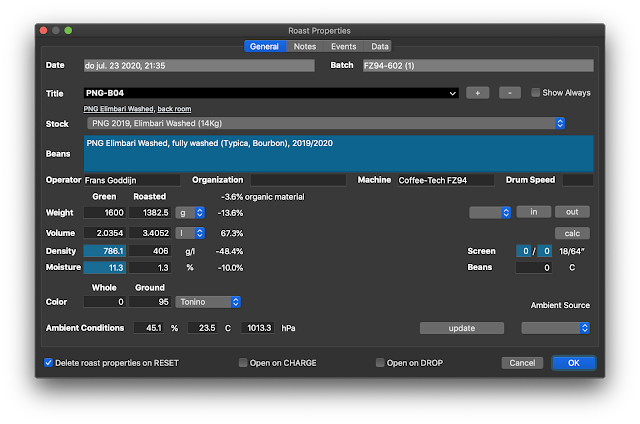 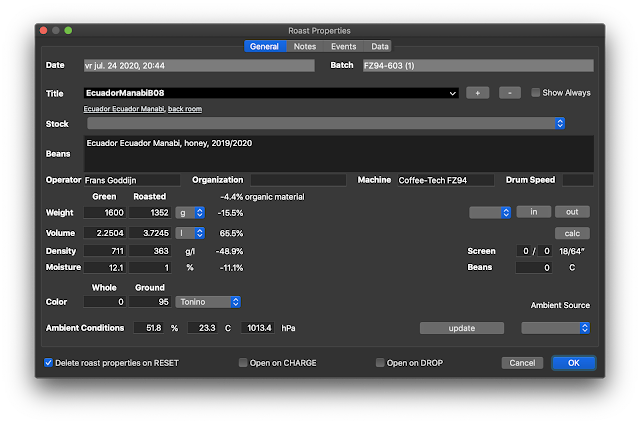 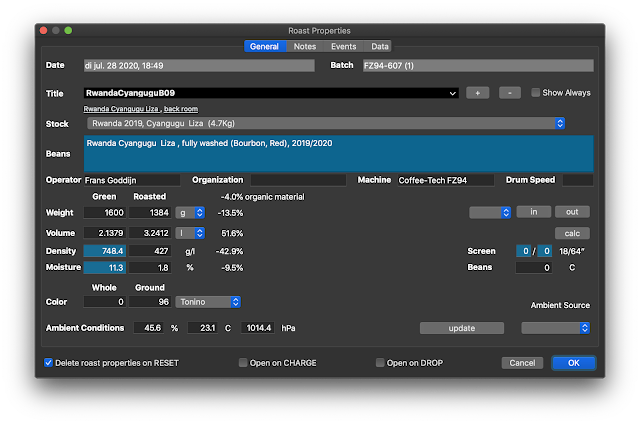 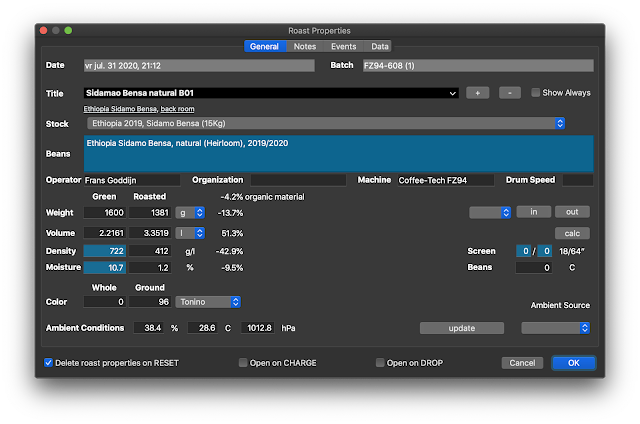 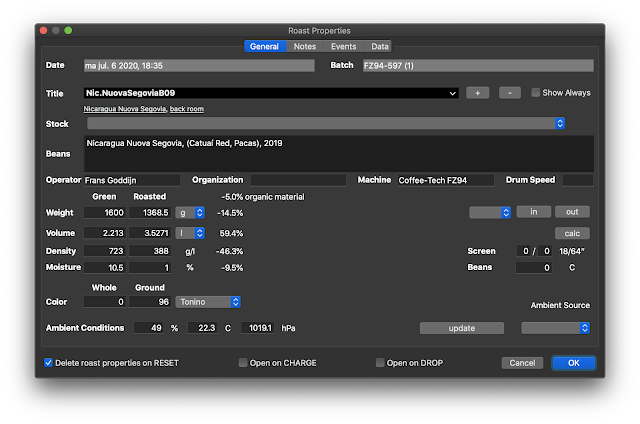 As I received 20kg of specialty coffee from Hoofdkwartier (https://www.hoofdkwartier-koffiebranderij.nl), I wanted to waste no beans getting the profile right so I looked for a similar bean's profile that I roasted earlier, loaded it as background and started roasting.

Always interesting watching other people's curves.  Great to find one in real time.  Interesting how you have flat ROR starting from 5 mins. Never tried that, but doesn't it lead to baking?  Also is your charge temp at 250c?

My reply:
Hi Ian. No not 250ºC. The blue line touching near 250ºC is the RoR and for the RoR you must not read the left Y axis (250ºC but instead the right side X axis (52ºC/min).  I usually warm up the machine to DT=210ºC, then press START in Artisan, give it time to start reading and drawing the graph and CHARGE the beans as DT reads 215ºC. At 1:31 in the video you can see DT probe peaking at 220ºC when the beans are charged into the drum and that's when DT starts reading lower and BT (Beans at room temp on a warm night) starts rising. RoR at 5min into the roast is about 10ºC/min and at 7min it's 8ºC/min -- that is not a steep descent but nevertheless a gradually declining Rate of Rise and the processes inside the beans are still being pushed on and on, the continuing rise of temperature keeping the process going like the percussion section in a band (albeit slowly lowering the speed ;-). Keeping the beans at the same level temp would be stalling the process but that is different than RoR. After 9mins you can see the heat coming off the beans being felt by the BT probe, but this would have been steeper if I had not lowered energy and raised airspeed gradually up to that point. Some of the excess heat from the beans is used to keep the process going. In result there is not the sharp incline, followed by more air / less heat to fight the sudden heat, then the sudden loss of energy. Instead the process advances gently with a continued push on the development process.
Richard Held sent me a few questions:

DE is visible mostly around a measured BT=135ºC (beans are probably hotter then but as a measuring point it’s helpful, no need to relocate the BT probe until I get the temp that I expect).

In order to have a consistent Area Under Curve (which starts at DE) measurement I automatically have Artisan declare DE at 135ºC.

I have heard less than 4 minutes (nearly impossible for me to achieve) is undesirable?

Early on I also aimed for a longer time until DE, but when I assisted (weighing and color testing) at a German roaster contest, I noticed all super talented roastmasters participating heated up the drum more than I expected and dashed into the roast at a steeper RoR which allowed to a more precisely managed decreasing RoR later on in the roast.

Why those particular heat and air adjustment temps?

I arrived at these while experimenting to get a gentle decrease of RoR, minimising the BT “bump” at start of FC and thereby also minimising the sudden slump in RoR which one can get if one marches right into FC at high energy and this, added with the explosive heat coming off the beans, suddenly escalates the BT, which is countered by sudden decrease in heat or a blast of air, which over-reacts causing a ‘bean chill’ instead.

Do you typically follow those for most EYC beans?

Also not sure how the knowledge of moisture content plays into roast planning since I have no means to measure at home, but the equipment looks cool.

I'll bet it is expensive.  Same as for the color measurement

About your RoR curve, what makes it so steep at the beginning? And how after the peak it is falling down steeply? My RoR always has a very moderate decline.

I push in the BT probe at the same moment as the beans are CHARGEd, which gives a very different line from roasters keeping the BT probe stuck in the machine permanently.

When you roasted with turning point did you have preferred range for that point?

In my view, 'turning point' is completely meaningless. The beans do not have a 'turning point'. They enter the drum at room temp or storage room temp and immediately start warming up fast. The BT probe, if it has been in the machine during warmup, is very hot at the start and quickly cools down as the cooler beans (warming up) bounce and flow around this BT probe. At a certain moment the BT probe stops cooling down and finally begins showing a temp directly related to the bean temperature, and starts rising in temp along with the beans. Until that "turning point" the BT probe shows no useful information and until that moment the RoR is also meaningless.
Someone from Romania wrote:

My reply:
I assume you are very familiar with Scott Rao's work about roasting.

Water makes up 90% of the lost weight, Rao writes.

Then the 1.2% moisture content measured in the roasted beans is actually more than one would expect according to Scott Rao and certainly not "impossible". 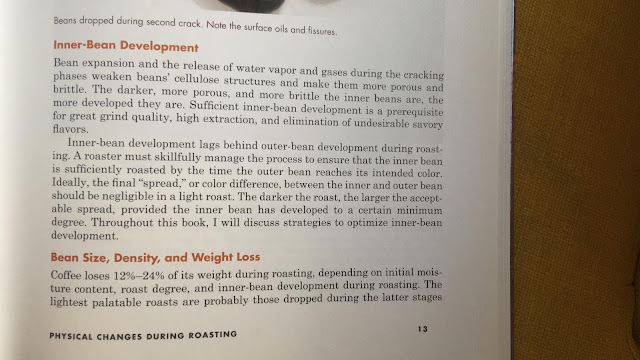 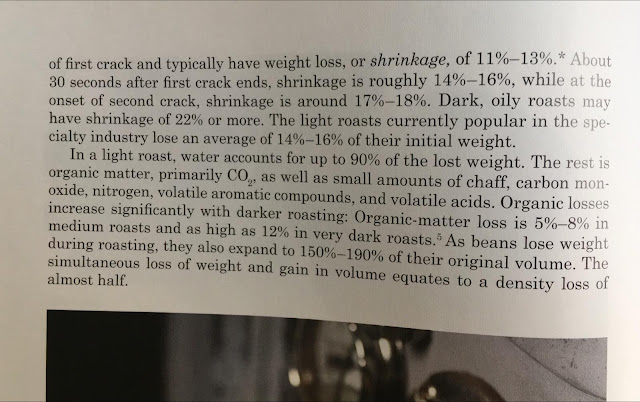 Posted by Frans at 11:42 Geen opmerkingen:

Posted by Frans at 02:12 Geen opmerkingen: