My local line pressure is about 2 bar but during pre-infusion, a few seconds of 3 bar line pressure is more ideal so my plumber installed a Grundfos device that quietly adds nearly one bar of line pressure to the system (water filter, pressure/flow regulator, LONDINIUM L1-P espresso machine. Tije made me a nice push button switch to temporarily power up the Grundfos. Releasing the button stops the device, so it can't be accidentally powered continuously and/or overheat. Vimeo version: Grundfos line pressure device from Frans Goddijn on Vimeo .
Een reactie posten
Meer lezen 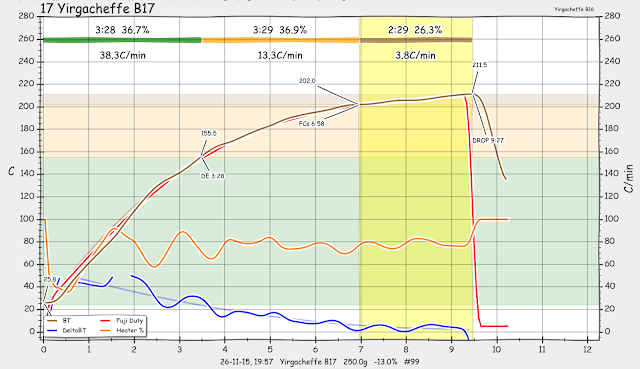 Smooth talk This morning, Jan van der Weel and I were on the phone, discussing ways to ensure that the several roast profiles we want to try out are executed smoothly so we can evaluate the effect of the small differences in tasting. The toolbox offered by Artisan is very helpful here. Rate of Rise almost touching zero at 7:00 and also barely at 8:00 First Crack Turbulence Often, you can see a sudden change in the heat development around the onset of First Crack. At that time, the pressure inside the million or so cells of the bean has increased so much that a lot of things begin to happen. Steam, carbon monoxide and carbon dioxide begin to escape out of the weak spots in the enlarging bean cells and hundreds of compounds that will be decisive for the taste of the coffee are composed, decomposed and in some cases recomposed, each in their own pace. The temperature probe sitting inside the mass of beans that are rolling and bouncing against it passes on as truthfully as poss
2 reacties
Meer lezen

Roasting Yirgacheffe in the night 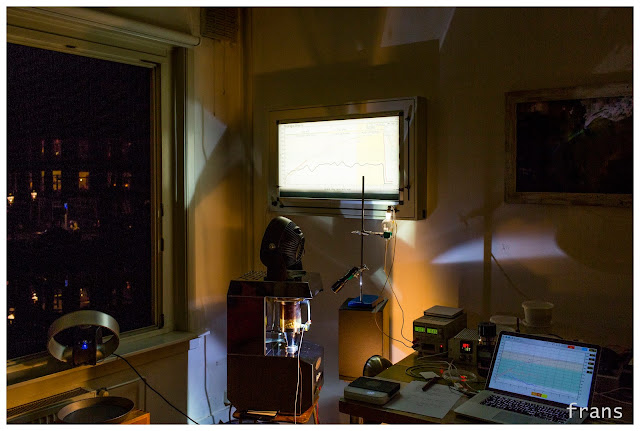 Coffee Roasting: Gerhard A. Jansen --- and other Books on Roasting 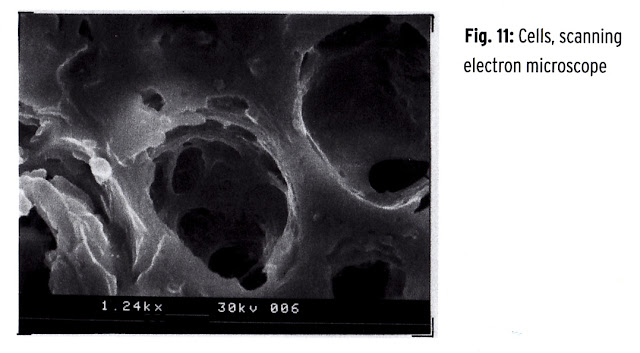 One of the books about roasting that many roasters are hunting for is " Coffee Roasting -- Magic, Art, Science, Physical changes and chemical reactions " by Gerhard A. Jansen who was heading the R-n-D of Probat for a number of years at the conclusion of a long career at the company. Probat-Werke in Emmerich published the booklet in 2006. A typical coffee bean has a million cells Jan van der Weel owns a copy and he kindly let me have it for a few days. The seventy-one pages of the book are crammed with information so it takes more than one reading to grasp enough and to understand it all one would need a degree in food chemistry. A coffee bean has a million cells, I learned. During the roasting process, the rising bean temperature  also heats up the water inside the bean. At normal atmospheric pressure, this water would boil at 100ºC but inside the bean, the cells more or less keep the water closed in and the cell gets in a state like a pressure cooker: the increasing
Een reactie posten
Meer lezen 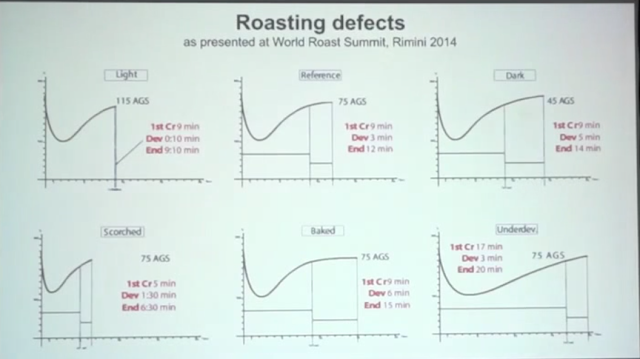 Learning about coffee roasting is very adventurous. It's an old craft but much knowledge about it is anecdotal, some legendary handbooks have gone out of print ages ago while the available handbooks can be highly technical without giving any concrete pointers and the more "experts" you hear, the more it seems to become obvious that everyone is just groping in the dark, doing the best they can amidst elusive facts. I watched an interesting video (see at the bottom of this blog). In it, Morton Münchow presents the results of a scientific research into preferred taste differences between several roast profiles using the same beans. A panel of 92 persons tasted samples (by cupping , I presume) from the coffee in a completely randomized manner. Each coffee was tasted three times but the members of the panel could never tell from any number or code what they could expect. There as an average trend of preference and there were members who agreed to that line remarkably closel
Een reactie posten
Meer lezen 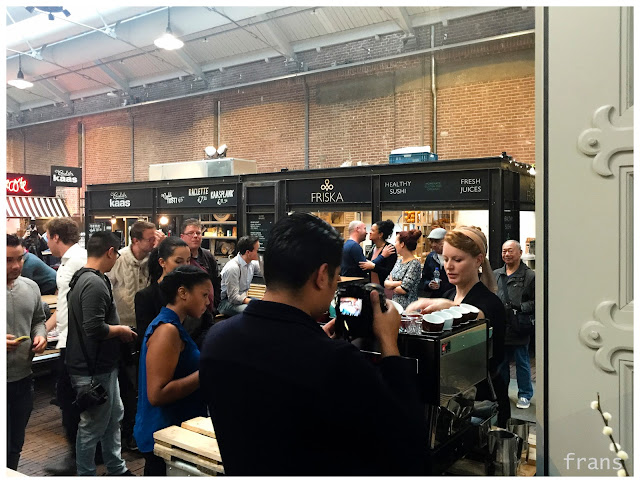 Thirteen excellent baristas entered the competition . After a theory round, each in turn prepared an order of five different drinks for the jury to taste. In the last round, five finalists prepared and presented their coffee based 'signature' drink. Three winners were announced in the end and who of these are 3, 2 and the winner #1 will be revealed at the end of the month during a gala dinner event. Jury were Moniek Smit , Esther Maasdam , Vincent Zwaan , Jan van der Weel and Frans Goddijn. Head jury, coordinator and organizing host was Rahwa Gebremeskel .  Technical jury: Bina Anbar and Ilithya Merien .  Pictures below were the few I could take when there was time between taking notes, comparing notes, discussion. It's not a "report" about all that happened nor an implication of results. Top view, picture by Jan van der Weel
Een reactie posten
Meer lezen 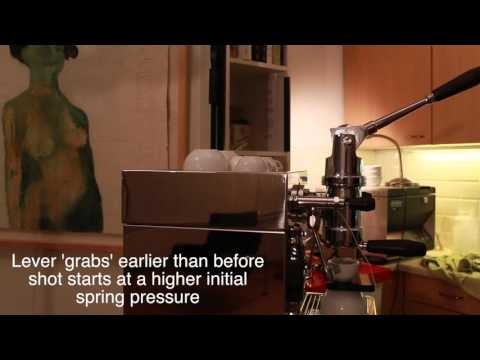 The HX / brew head of my L1-P espresso machine is connected to the water line so the pre-infusion pressure is the same as the line pressure. In my home, line pressure after water passes the Bestmax filter was nearly 2 bar, but the advised 'ideal' line pressure is around 3 bar. This morning, the plumber paid me a visit and installed a line pressure booster. It has three settings. OFF is pretty obvious. AUTO means that it starts when a flow speed of 1.5 liter per min is detected and MANUAL means that it's on permanently. I set the switch on MANUAL, then connected the power lug to a cable with a switch on the right leg of the trolley that my Londinium espresso machine sits on, so I can switch on the booster for a few seconds during pre-infusion. Now, the pre-infusion pressure is higher and when releasing the lever, it catches at an earlier stage in a gradual manner. I can grind a little finer as the initial brew spring pressure is higher now as well.
Een reactie posten
Meer lezen 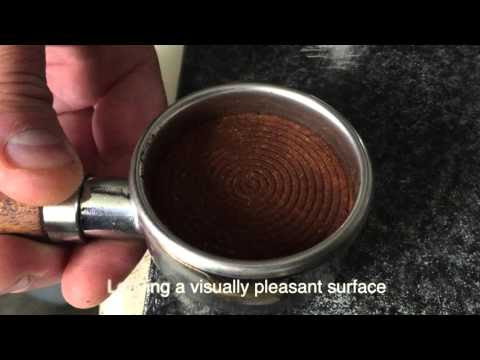 Tije used his lathe to carve a ripple in the bottom of the tamper that he made for his La Pavoni and for him, this solved the issue of grinds climbing up against the basket wall during his "nutating' and tamping. Below is a little video, also showcasing the new ROK grinder that he uses and some modifications. He added a little collar to the bottom of the grinder to help prevent grinds flying around with static electricity. This addition may help a little but a droplet of water appears more effective. He also made a seat for the La Pavoni naked portafilter with a magnet in the bottom which then auto-centers to rest exactly below the axis of the burrs. Since I got the latest LONDINIUM button tamper which has a tapered form, I rarely use the original straight sided button tamper so I asked Tije to carve ripples in that bottom as well. On my system this does not seem to make a big difference but I do like the feel of it and also the looks of the puck. Original tamper, n
Een reactie posten
Meer lezen
Meer posts