Recently I rediscovered a very old pocket knife in a drawer of mine. I bought it in a thrift shop more than 30 years ago because at the time I happened to have a vintage fountain pen with a barrel of practically the same marbled material as the scales of this little pocket knife. The pen was produced in the late twenties of the last century so the knife might also be from that era: 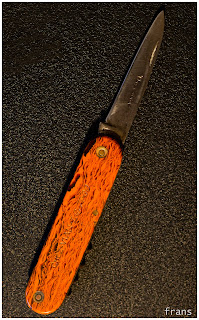 It is probably a "Pradel" knife from France but the exact whereabouts may be hard to establish because the Pradel family of knife makers is very fragmented.

Retrieving the knife from my past prompted me to buy a number of whetstones to sharpen it again and I eventually took it to a knife friend who is a very dedicated expert knife sharpener in Apeldoorn. He also sharpens kitchen knives for chefs in restaurants and this allows him to learn more about the endurance of certain methods of sharpening. Razor sharp knives, for instance, may need so much maintenance to keep them sharp that this may be unpractical in a production environment, whereas other very sharp blades will keep much longer, even when cutting many kilograms of meat.

Meanwile I have enjoyed watching dozens videos about knives. These video clips by devoted knife collectors mostly just show the hands of a man, the knife he is opening and closing and turning in his hands. You hear a pleasant voice bantering in a very relaxed way about this and that detail of engineering, steel types, wood processing, sharpening techniques. The best are those that in part tell a story of someone's life, like this one:

The above video is actually inspired by another one in which a friend of his , Rob Bixby, discusses a "diverse and rather eclectic" collection of knives that illustrate how one can get a pocket knife and gradually come to realize that one has become a collector. Knives are obviously more than just tools here. To many men they are jewels and handling these is an almost meditative way to enjoy beauty in simplicity:

That video ends with the presentation of a Chris Reeve Sebenza pocket knife. To many it's the pinnacle of production knives and it sets an example that makes some happy and others jealous. The basic design of this knife exists since 1991 and I find it very remarkable that over the years, many other manufacturers have had a go at copying the design and offering it at half the price or less but no one succeeded in taking the market share Chris Reeve and his team cut out for themselves. It's just too hard to match their obsessive precision in tooling. A few years back Chris Reeve moved to a slightly harder type of steel which is more enduring while still allowing the owners to sharpen the blades at home using the sharpening tools available to them.

One hardly ever sees such a treasured knife at work, apart from a demonstration of sharpness on video when the owner cuts a piece of paper or splits a hair in two.

I decided to take a minute and "Peel a Pear" with my brand new Small Sebenza. I notice that when fruit is cut with a super knife, the cut exposes a super juicy chunk of fruit. The cells are cut but the juicy part is not pressed or ripped  like when you use a blunt knife.  I might add a "Peel me an Orange"  session later, or a "Slice Me a Banana."

Below is the VIMEO version of the video at the top:

More by Rob Bixby about the Sebenza design and engineering: